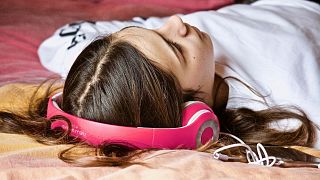 The pandemic has had a significant impact on the mental health of young people. But could it also have physically altered their brains?   -   Copyright  Canva
By Nicole Lin Chang  •  Updated: 02/12/2022

The COVID-19 pandemic has not only led to poorer mental health among teens - but it has also physically aged their brains.

That’s according to new research from a team at Stanford University in the United States published on Thursday in the journal Biological Psychiatry: Global Open Science.

A growing body of research is showing that the pandemic severely affected the mental health of young people around the world, with lockdowns and school closures taking their toll on children's and teenagers’ emotional well-being.

But these new findings suggest that pandemic-related stressors have not only affected the mental health of adolescents, but they have also physically altered their brains, making their brain structures appear several years older than those of comparable peers before the pandemic.

Researchers compared the MRI scans of 81 teens taken before the pandemic with those of 82 teens taken between October 2020 and March 2022 - during the pandemic but after lockdowns were lifted - in the San Francisco Bay Area, where all the teens were from.

Of these, they matched 64 participants in each group for factors such as age and sex.

They found that, compared to adolescents assessed before the pandemic, those assessed after lockdown not only had more severe internalising mental health problems, but also had reduced cortical thickness, larger hippocampal and amygdala volume, and more advanced brain age. In effect, their brains had aged prematurely.

In fact, these post-lockdown adolescents showed neuroanatomical features more typical of older people, or those who had experienced significant adversity in childhood.

'Their brains had changed'

As it happens, the team hadn’t originally set out to study how pandemic lockdowns had affected teenagers’ brain structures.

The kids in the study were actually part of a larger cohort for a long-term study on depression during puberty.

But then COVID-19 hit, and the researchers could not conduct their regularly scheduled MRI scans.

When they could resume the brain scans, they realised that they couldn’t just pick up where they left off.

"We had this big gap now," Ian Gotlib, a professor of psychology at Stanford University and the study’s lead author, told Euronews Next.

"We could figure out how to statistically control for that gap… But that assumes that the kids now are just the same as the kids were before the pandemic. And we weren't sure that was the case".

"These kids after the lockdowns had, we knew already, higher rates of depression and anxiety and sadness," he said.

Until now, these sorts of accelerated changes in “brain age” have appeared only in children who have experienced chronic adversity, for example from violence, neglect or family dysfunction, according to the researchers.

And there’s still a lot we don’t know about what these brain changes mean, or how permanent they might be for the teens assessed in this study, said Gotlib.

"There’s no comparison group. So, in five years, you can't compare these kids with kids who didn't experience the pandemic - because they don't exist," he said.

What are the implications of these changes?

Although physical alterations to the brain might sound serious, Gotlib stressed that there’s a lot we don’t know about the long-term implications of these changes for adolescents.

"It may be that this sets them on a faster biological ageing course," he said.

"But it may be that this is a blip and a kind of reaction to the pandemic stress.

"This is a remarkable effect of a relatively short stressful period on the brain,” he pointed out. “And that maybe gives me some hope that it's not long-lasting".

It’d be nice to get a sense of whether these findings replicate in other, larger samples; and more socioeconomically and racially and ethnically diverse samples as well.

Adolescent brains are still elastic, and their brains are able to adapt and change with relative ease.

"Maybe this is the adaptation to the stress of the pandemic - and when that stress subsides that ageing will slow," said Gotlib.

What’s especially important, he added, is that the adverse mental health changes that the research also found are something that is treatable.

"You can't go in and change the brain directly, but you can certainly treat the mental health, the depression, the anxiety. And I think that's what's really important," he said.

"My guess is that starting to treat the mental health components will start to normalise or even slow the progression of the brain changes".

The teenagers will have their brains scanned again by Gotlib and his team when they hit 20, he added.

More research is needed on a diverse cohort

The findings could also have implications for other longitudinal studies that have spanned the pandemic, pointed out Jonas Miller, an assistant professor of psychological sciences at the University of Connecticut in the US, who was a postdoctoral fellow in Gotlib’s lab during the study.

"We often use longitudinal designs, and our whole field has been impacted by the pandemic," he told Euronews Next.

"So I think we need to think carefully about our analyses, and the assumptions that we're making when we're doing different kinds of analyses that include individuals assessed both pre and peri - or during - the pandemic".

Miller also talked about some of the study’s limitations, including that the teenagers studied were all from the San Francisco Bay Area. Another sample would ideally be much larger and more diverse, he said.

"It’d be nice to get a sense of whether these findings replicate in other, larger samples; and more socioeconomically and racially and ethnically diverse samples as well," said Miller.

According to the team, another key task for future research is to determine whether these alterations are merely temporary effects or stable changes that will characterise the current generation of young people.

Gotlib plans to keep following the same group of young people through later adolescence and young adulthood, tracking whether the pandemic has changed the trajectory of their brain development over the long term.

He also plans to track their mental health and will compare the brain structure of those who were infected with the virus with those who weren’t.