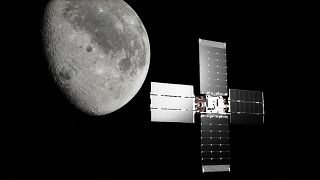 Animation render of the Lunar Flashlight satellite which will probe the Moon for the presence of water ice.   -   Copyright  Georgia Tech
By Aisling Ní Chúláin  & AP  •  Updated: 02/12/2022

After years of preparation, a team of researchers is hoping their small satellite will soon leave Earth and begin its mission to probe for water ice on the Moon.

The Lunar Flashlight was developed by NASA along with researchers and students from Georgia Tech University and could have implications for future manned missions to the lunar surface.

It was initially due to be launched aboard a SpaceX Falcon 9 rocket on Wednesday but the mission was postponed following a data review and inspections of the launch vehicle.

It will take the diminutive, data-gathering spacecraft about three months to reach its orbit where it will employ near-infrared lasers and an onboard spectrometer to map ice in permanently shadowed regions near the Moon's south pole, according to NASA.

If its presence can be unambiguously identified on the Moon, water ice could be a valuable in situ resource for future manned Artemis missions.

Researchers and students at Georgia Tech University in Atlanta became involved in the project when NASA asked the team to integrate the full spacecraft for them.

‘Building something to go into deep space’

“They had built the other pieces of the spacecraft, and all of those pieces came here to Georgia Tech and with the help of Georgia Tech Research Institute, we were able to put all the pieces together into the single overall spacecraft,” Dr Glenn Lightsey, Director of Georgia Tech’s Center for Space Technology and Research, said.

Once the Lunar Flashlight is launched, the team at Georgia Tech will then pivot to operating mission control from their small lab in Atlanta.

There they will be responsible for checking the satellite’s systems, and managing scheduled propulsion burns to set it on its path to the Moon.

As for the students involved in the project, their excitement for the project is palpable.

“I can't really quantify it in words how cool it is to build something that is going into deeper space".

SpaceX said on Twitter that a new launch date would be announced once confirmed.