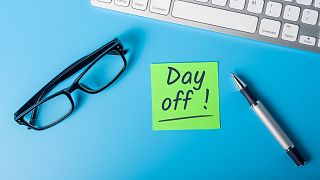 The biggest ever four-day working week trial has come to an end, with more than 70 companies and organisations taking part across the UK.

The full results of the study will be released by the 4 Day Week Campaign early next year, but some of the companies that took part in the trial have already told Euronews Next how it boosted productivity and staff happiness.

"We did a heck of a lot of research beforehand, but even then I'm still quite surprised at how successful it's been," said Simon Ursell, the managing director of environmental consultancy Tyler Grange.

He was aware of the challenges that squeezing the same amount of work into four days might present.

"You have to innovate and you have to come up with new ways of working, and that puts some pressure on," he said. Two employees even left, because they didn’t want to do their work in a four-day week. “But that’s two people, and maybe there were other factors at work there as well, but they wanted to work five days".

The company even developed an app to measure employee fatigue and happiness and, unsurprisingly, found the three-day weekend reduced fatigue, while reported levels of happiness increased.

And as for productivity? "I wasn't expecting it necessarily to be over 100 per cent, but we are at 101 per cent," he said.

Ursell said he was a cynic beforehand, but has now become a "huge convert" to the idea of a four-day week. He points out many people don’t realise how much time is wasted at work, and how much can be achieved when productivity levels are higher.

"I've talked to a lot of different organisations and every single person I speak to, without fail, 100 per cent of them say the same sentence to me, which is: 'It'll work for you, but it won't work for us'. But I think it requires a sort of change in attitude. It requires a bit of thinking about".

We are beating all of our productivity targets against last year's outputs, individual productivity is much higher than expected and sales and profitability have also accelerated over the pilot.

He insists he would be "foolish" to bring back the five-day week, as "we would lose money - that’s just an economic fact".

The four-day week wasn’t the right answer for every employee at Tyler Grange, and according to Janine Chamberlin, the UK country manager for LinkedIn, that reflects in the data on employee workplace expectations the social network has collected.

“LinkedIn’s recent Global Talent Trends Report found that the top priority employees value the most in employers today - beyond compensation - is flexibility, followed by skills development opportunities, and work-life balance,” she told Euronews Next.

"So whilst it’s great to see some organisations looking to implement the four-day working week as a work perk, it’ll be important that businesses also take the time to recognise that this is not the only answer to this expectation for more flexibility".

Skincare product manufacturer 5 Squirrels was another company on the pilot that is adopting the four-day week permanently, with unanimous support for it amongst the staff.

“We have had a very positive experience with the 4-day week overall, we are beating all of our productivity targets against last year's outputs, individual productivity is much higher than expected and sales and profitability have also accelerated over the pilot,” said Gary Conroy, the founding director.

He told Euronews Next the biggest difference he’s seen amongst his workers is a reduction in procrastination and disruption, with “less inclination to delay things” and everyone “getting through more tasks in less time”.

He recommends other companies give it a go, or at least implement some of the reduced working hours techniques to gauge the impact. “If our experience is anything to go by I am sure they will soon see results,” he said.

A survey at the halfway mark of the pilot found 86 per cent of the organisations that responded to the campaign’s questions were “extremely likely” or "likely" to consider retaining the four-day week policy after the trial period.

Out of 70 organisations involved, 41 responded, meaning at least half were likely at that point to continue with it.

There have been many four-day week trials across the world lately – and they all seem to end in success.

Another four-day week trial, this time in Ireland, wrapped up on November 30 as well and was called "a resounding success" by the organisations behind it.

The four-day week can be at the forefront of a new age of work, providing transformative social benefits without losing pay or productivity.

All of the companies have said they intend to continue with the four-day week, with nine of them committing to it immediately.

According to the researchers, there were "significant improvements" to metrics such as stress, burnout, and fatigue. The average sleep time for participants increased from 7.02 hours a night to 7.72 hours - that's over 40 minutes more sleep each night.

A possible explanation is that those with an extra day off during the week use that spare time to do some of the chores they would otherwise tackle in the evenings.

"In today’s working world there’s a mismatch between the amount of time we spend working and the time we spend with our families and friends," said Kevin Callinan, the general secretary of trade union Fórsa, which supported the Irish trial.

"The four-day week can be at the forefront of a new age of work, providing transformative social benefits without losing pay or productivity".