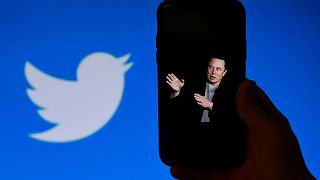 In this file photo taken on October 4, 2022, a phone screen displays a photo of Elon Musk with the Twitter logo shown in the background,   -   Copyright  OLIVIER DOULIERY/AFP or licensors
By Pascale Davies  •  Updated: 25/11/2022

Twitter’s boss Elon Musk has unveiled a tentative new plan for user verification which will be released next Friday (December 2), the billionaire confirmed on Twitter.

The move comes after he paused monetising the “blue check”, which verifies user identity, following a wave of parody accounts impersonating former presidents and celebrities.

Musk said on the social media platform that there would be three types of verification ticks. ​​

“Gold check for companies, grey check for government, blue for individuals (celebrity or not) and all verified accounts will be manually authenticated before check activates,” he wrote on Twitter on Friday, calling it “painful but necessary”.

He also said all verified accounts would be manually authenticated before they are given one of these check marks.

It was not immediately clear, however, if users would have to pay for the service.

The Verge reported that the subscription to use the service called “Twitter Blue” could increase from $5 to $20 (about €5 to €20).

Musk has used Twitter as a platform to survey users about some company plans, such as whether Twitter should offer a general amnesty to suspended accounts, provided that they have not broken the law or engaged in egregious spam.

As a result of the poll, which he called a “Vox Populi, Vox Dei” (​​the voice of the people, the voice of God), he said he would begin reinstating controversial accounts.

Last week, former US president Donald Trump, who has been accused of spreading COVID-19 misinformation and was impeached for incitement of insurrection over the 2021 US Capitol attack, had his Twitter account reinstated.

Musk has also fired much of Twitter’s staff, including those who removed accounts that spread misinformation or incited hatred. Others have quit in droves after Musk issued an ultimatum to employees to commit to a “hardcore” new Twitter and work gruelling hours, or leave the company.

Musk’s Twitter: A platform for free speech or extremist hate?