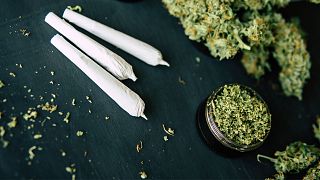 The study found higher rates of some lung conditions in smokers of marijuana   -   Copyright  Canva
By Luke Hurst  •  Updated: 16/11/2022

Smoking weed may be worse for your lungs than smoking purely tobacco-filled cigarettes, new research suggests.

Researchers at the University of Ottawa and The Ottawa Hospital examined the chest CT scans of 56 cannabis smokers, 57 non-smokers, and 33 smokers of tobacco.

The scans were taken between 2005 and 2020. They showed the weed smokers had higher rates of paraseptal emphysema - a condition which causes shortness of breath, due to damage in the air sacs in the lungs.

The marijuana smokers also had higher rates of other conditions including bronchiectasis, bronchial wall thickening, and mucoid impaction.

The researchers set out to examine the effects of smoking weed on the lungs, and the health implications, because marijuana has only been legalised recently in many countries, including in Canada in 2018.

There has therefore not been much time to investigate its impacts on a wider set of the population.

“I can tell if someone is a heavy or a long-time cigarette smoker when I look at a CT scan,” said Giselle Revah, a radiologist and Assistant Professor in the Faculty of Medicine.

“With marijuana being the second most inhaled substance after tobacco, I started wondering: What does marijuana inhalation look like on a CT scan? Would I be able to tell if someone was a marijuana smoker, is it different from cigarette smoke?”

But the researchers say a more in-depth study is needed, and they cannot reach strong conclusions from this one, notably because 50 of the 56 weed smokers also smoked tobacco.

“What's unique about this study is that there hasn't been anything comparing the imaging findings in tobacco smokers to marijuana smokers before,” Revah said.

“In fact, there is a lack of imaging research in marijuana, probably because it's still illegal in many parts of the world, and in many US states, which is why I think we were the first to do a project like this”.

“We've identified an association between marijuana smoking and damage to both the small and the large airways,” she said. “We need larger, more robust prospective studies with more patients to confirm it".

Could baby formula made with human protein emulate breast milk?