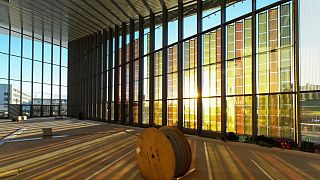 All that natural light flowing through your windows may one day do much more than brighten your mood.

Scientists in Switzerland have reached a new efficiency record for transparent solar cells, paving the way for electricity-generating windows that could help power our homes and devices.

Also known as Grätzel cells, dye-sensitised solar cells (DSCs) are a type of low-cost solar cell that uses photosensitised dye attached to the surface of a semiconductor to convert visible light into energy.

The previous versions of DSCs were largely reliant on direct sunlight, but scientists at the École Polytechnique Fédérale de Lausanne (EPFL) have found a way to make transparent photosensitisers - molecules that can be activated by light - that can “adsorb” light across the entire visible light spectrum.

"Our findings pave the way for facile access to high-performance DSCs and offer promising prospects for applications as power supply and battery replacement for low-power electronic devices that use ambient light as their energy source," wrote the authors of the study, published in the scientific journal Nature.

DSCs are transparent, flexible, and can be manufactured in a wide range of colours for a relatively low cost. These see-through solar panels are already being used in skylights, greenhouses, and glass facades.

In 2012, the SwissTech Convention Center became the first application of DSCs technology in a public building.

In 2017, the Copenhagen International School inaugurated its new building covered by approximately 12,000 blue-hued but transparent solar panels that use the same DSC technology.

They provide around 300 megawatt hours (MWh) of electricity per year, meeting over half of the school’s annual energy needs.

But despite the fact that energy-generating windows have been on the market for a number of years, one recurring complaint was their limited capacity for generating electricity when compared to traditional solar cells.

The new breakthrough from the team at EPFL could soon help overcome that barrier.

Thanks to a new molecule design, they have increased the power conversion efficiency of DSCs - in other words, the share of the solar energy shining on them that is converted into usable electricity - reaching beyond 15 per cent in direct sunlight and up to 30 per cent in ambient light conditions.

For reference, commercial solar panels currently have an average efficiency of around 20 per cent.

Materials that convert sunlight into electrical energy have a huge potential to fulfil the planet’s increasing need for cost-effective renewable energy technologies.

Back in 2017, a team at Michigan State University that developed a new type of solar concentrator creating solar energy when placed over a window deemed that transparent solar technologies could supply around 40 per cent of energy demand in the United States.

It estimated that if combined with rooftop solar units - and the right storage technology - that share could rise to almost 100 per cent.

In Europe, solar power accounted for 12.2 per cent of the electricity generated in the EU this summer, the highest share on record.

Based on current trends, it has the potential to meet up to 20 per cent of the EU’s electricity demand by 2040, according to the European Commission.

Most of the planet’s solar energy currently goes uncaptured. What would things look like if every window around us could harvest it?

Fighting from my living room: How one volunteer hacker helped Ukraine

COVID may have collectively changed our personalities, study finds