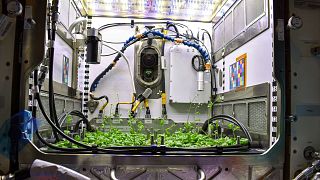 For more than 20 years, astronauts on the International Space Station (ISS) have carried out thousands of scientific experiments in what is arguably one of the coolest labs in the universe.

Now, a new batch of experiments has arrived at the orbiting laboratory, tackling topics such as 3D bioprinting, plant adaptation - and even fertility in space.

We take a look at some of the experiments sent up on the latest Northrop Grumman resupply mission for NASA, which arrived at the ISS on Wednesday.

Could humans one day inhabit space? It’s still a pretty distant scenario, but to prepare for this possibility, scientists are studying what spending long amounts of time in reduced gravity might do to our fertility.

As part of the OVOSPACE investigation, which is sponsored by NASA and the Italian Space Agency (ASI), researchers are studying how microgravity influences ovarian cells.

This investigation also could support development of treatments to improve or restore fertility in people on Earth.

They’ve sent up bovine ovarian cells to the ISS to look at how these cells’ development might be affected by being in space, as part of the research they say could also lead to improved fertility treatments on Earth.

Living for prolonged periods of time in the reduced gravity of the Moon or Mars could impair fertility, explains principal investigator Mariano Bizzarri, from Sapienza University of Rome’s department of experimental medicine.

"This threatens the goal of establishing permanent or extended settlements beyond Earth," he said in a statement.

"Deregulation of the reproductive functions also may pose additional health risks," he added.

"This investigation also could support development of treatments to improve or restore fertility in people on Earth".

Doctors have long dreamed of being able to 3D print organs on demand, something that researchers are hoping microgravity will be able to facilitate.

However, printing tiny, complex structures found inside human organs, such as capillary structures, has proven difficult to accomplish in Earth’s gravity environment, say the researchers behind the BioFabrication Facility, a 3D bioprinter.

As such, they’re hoping that printing organ-like tissues in microgravity could act as a stepping stone toward making whole human organs in space.

Back in 2019, the BioFabrication Facility successfully printed a partial human knee meniscus as well as human heart cells during its first trip to space.

An upgraded version of the 3D printer will make knee cartilage tissue aboard the ISS, using bioinks and cells to see if printing in microgravity can produce tissue samples of a higher quality than those printed back on Earth.

How plants adapt to space

Another experiment on board the ISS looks at how plants adapt to space, in research that could one day lead to better food as well as better air and water purification systems on future space missions.

As part of the Plant Habitat-03 investigation, seeds produced by space-grown plants are returned to Earth, processed, and flown back to space. Researchers study if this gives an adaptive advantage to the next generation.

Plants exposed to spaceflight undergo changes that involve the addition of extra information to their DNA, which regulates how genes turn on or off but does not change the sequence of the DNA itself. This process is called epigenetic change, explain the researchers.

They want to find out whether these adaptations in one generation of plants grown in space can transfer to the next generation.

"This could provide insight into how to grow repeated generations of crops to provide food and other services on future space missions," they said.

First satellites from Uganda and Zimbabwe

Alongside these experiments, the first satellites from Uganda and Zimbabwe have also arrived at the ISS.

CubeSats (essentially, mini cube-shaped satellites) developed by students from Uganda, Zimbabwe, and Japan will collect data about Earth that can then be applied to their home countries.

The satellites were developed as part of a cross-border university project that enables students from developing nations to get hands-on satellite development experience.

Space will also help scientists in their study of dangerous mudflows, in particular the catastrophic ones that can occur after a wildfire.

Rain then erodes the soil, and this can turn into catastrophic mudflows consisting of sand, water, and trapped air, that carry heavy boulders and debris downhill.

“Gravity plays a crucial role in the process by driving air up and out of the mixture and particles down to the bottom of the water,” said principal investigator Ingrid Tomac, an assistant professor at the University of California San Diego’s structural engineering department.

"Removing gravity, therefore, could provide insights into the internal structure dynamics of these sand-water-air mixtures and a baseline for their behaviour".

Researchers on the ISS will examine a slurry of air, water, and sand in microgravity to better understand the properties of these dangerous mudflows, hopefully helping us better predict and model these events.