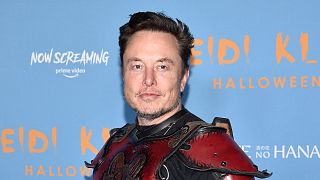 Musk, whose net worth dropped after investors dumped Tesla stock, sold 19.5 million shares of the electric car company from November 4 to November 8, according to filings with the Securities and Exchange Commission.

The purpose of the sale was not disclosed. But analysts had widely expected Musk to sell additional Tesla shares to finance his Twitter deal.

Musk, the world's richest man, had said in April he was done selling Tesla stock. Still, he went on to sell another $6.9 billion (€6.86 billion) worth of Tesla shares in August and said this was to pay for the social media platform.

Musk's net worth slumped by $70 billion (€69.7 billion) ever since he bid for Twitter in April.

After a months-long takeover drama, he finally completed the deal last month and has since engaged in drastic measures including firing roughly half the company's staff and plans to charge for blue check verification marks.

In all, Musk has sold more than $19 billion (€18.88 billion) worth of Tesla stock since April, including those in Tuesday's filings, likely to fund his share of the Twitter purchase.

The latest share sale leaves Musk with a stake of roughly 14 per cent in Tesla, according to a Reuters calculation.

On Tuesday, Musk's personal net worth dropped below $200 billion (€199 billion), according to Forbes, but he is still the world's richest person.

Musk had lined up banks including Morgan Stanley to help finance the Twitter deal. His original share of the deal was about $15.5 billion (€15.4 billion), Wedbush Analyst Dan Ives estimated. But if equity investors dropped out, Musk would be on the hook to replace them or throw in more of his own money.

Facebook parent company Meta to lay off more than 11,000 employees