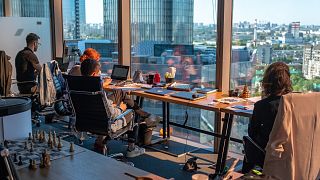 Workers across Europe are looking for multiple streams of income to combat the cost of living crisis.   -   Copyright  Unsplash
By Sarah Palmer  •  Updated: 08/11/2022

As inflation soars across Europe and beyond, an increasing number of workers are taking on additional jobs to combat the cost of living crisis.

New research from software company Qualtrics shows that nearly half of UK employees have either already looked for or are planning to look for a second stream of income, and 77 per cent are considering picking up overtime or extra shifts to pay their bills.

Other European countries are seeing similar trends: 30 per cent of workers surveyed in Germany and 22 per cent of those in France are considering taking on a second job. Around one-quarter are looking for a better-paid role.

Inflation is now in the double digits in the UK (10.1 per cent) and across more than half of the eurozone countries, including Germany (11.6 per cent), Belgium (13.1 per cent) and the Netherlands (16.8 per cent).

As gas and electricity prices soar, many workers are considering returning full-time to the office to help keep home energy bills at bay.

But 45 per cent of Europe-based employees say their employer is actually encouraging them to work from home to save on office electricity and heating bills, according to a separate study by SAP Concur, a travel and expense management services company.

Euronews Next reached out to workers who have taken on multiple jobs to make ends meet. They asked not to be identified by their real names.

How is the cost of living crisis impacting real workers?

Madeleine, 40, works full-time in a senior role as an office manager in Birmingham, England. Recently, she has taken up weekend shifts in an admin role at her local garden centre to earn some extra cash.

“I’ve been with my company for over 20 years. It’s a well-paid job, lots of perks, friendly people and I love the work.

“But I’m a homeowner, and the way bills have shot up in recent months - it’s leaving me with very little choice if I want to keep up with my mortgage, electric and gas, commute to work, food and living costs.

“My non-negotiable is my holidays. Nothing fancy, but when I have time off I love to visit new places and I’d be heartbroken if that was something I had to sacrifice. So that’s what keeps me motivated through my new six-day working week!”

Recent research by insurer Royal London has found that 5.2 million UK workers have already taken on an additional job to combat the rising cost of living - and another 10 million are looking to follow suit as we enter the winter months.

Casey, 27, works in the media and has taken on freelancing positions alongside their full-time job in London.

“To be honest, I think this industry is underpaid anyway. But it’s also really competitive and you’re very replaceable as a worker.

“I’m going against my contract by taking on these extra roles - but ultimately it’s what I need to do if I’m going to afford living in London so I can do my day job to full capacity.

“I do still get some free time, like weekends. But post-work pints are out of the question these days - I just have to get home and do whatever’s on my list for that evening”.

When asked how they were keeping it a secret from their employer, Casey said: “I’m not. My manager knows I’m freelancing.

“I think at the moment they’re more willing to turn a blind eye as they know without the extra income I wouldn’t be able to pay my rent or commute into work. It’s as simple as that”.

Throughout the pandemic, we saw lots of people changing their career paths to find a job which supported their mental wellbeing during what was an undoubtedly challenging time.

But while the Great Resignation was largely marked by employees looking for companies whose values aligned with their own, today’s job seekers place the most value on compensation, according to Qualtrics.

Parents are especially under pressure. Nearly half of the working parents it surveyed – 44 per cent – say they have looked for either a new or second job, and they were nearly twice as likely to move to cheaper cities (15 per cent) as workers without children ( 9 per cent).

“These findings are a clear signal to employers that financial security is a primary decision driver in people’s lives," Sarah Marrs, who leads Qualtrics' Employee Experience Product Science team, told Euronews Next.

"There is a real opportunity to open up conversations about what employees need. It doesn't need to be awkward - the right listening tools can capture this data in a safe and confidential way. It may uncover support the employer can provide which will allow them to retain talent”.

A survey from jobseeker website TotalJobs similarly found earlier this year that nearly half of UK workers were living payslip to payslip, and over a third (37 per cent) were looking to change jobs for higher pay.

Where the pandemic and its remote working policies freed up employees to work from anywhere - driving a huge spike in digital nomad lifestyles and people working abroad - now, it seems the search is on to find work in countries where your money goes further.

According to overseas jobsite Anywork Anywhere, searches for “work abroad” have increased by 56 per cent this year, with the most popular options being Dubai, Canada and Australia.

So far… not much besides global burnout.

Some governments have applied relief measures. For example, in the UK, households are getting support with their winter energy bills this year.

France adopted a €20 billion inflation-relief package over the summer, which enabled companies to pay employees higher tax-free bonuses in a bid to boost household purchasing power.

Italy has also introduced legislation to cut electricity and gas bills and Poland introduced a "payment holidays" relief scheme for individuals holding mortgages in Polish zlotys, allowing them to skip payments for eight months over a two-year period.

But the reality is, while prices continue to rise across every aspect of the global economy - from food and fuel to household bills - it’s no wonder millions of people are reassessing their income.