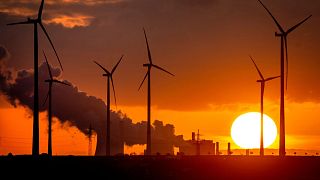 Wind turbines have long been one of the main methods of producing clean energy. While they haven’t been without their controversies over the years, compared to other green energy sources they are largely accepted as a planet and people-friendly solution to climate change.

And soon, they might be able to offer a dual function in the fight for our planet, by helping to capture carbon dioxide from the air and use it to make materials like concrete.

What do wind turbines do?

In brief, wind turbines use the kinetic energy produced by the wind to create electricity.

Harnessing the wind’s power as a clean energy source dates back as early as the 1800s. In 1887, Professor James Blyth from Anderson's College in Glasgow built the first wind turbine that was used to produce electricity.

Modern wind power as we know it, however, is largely recognised as originating in Denmark a decade later. In 1897, the country developed a 22.8-metre wind turbine that used horizontal-axis blades to generate power.

Over a century later, modern science still provides a wealth of opportunity for the development of wind power.

Most recently, researchers have uncovered that turbines could be used to literally pull greenhouse gases out of the air.

How could wind turbines remove carbon dioxide from the atmosphere?

The main advantage wind turbines have, compared to other methods of carbon dioxide removal, is their sheer height.

Often, the emissions produced by factories and cities are concentrated at heights that machinery operating at ground level would struggle to capture. Not to mention, these can involve costly installation and the development of complex underground pipework.

It’s also worth taking into consideration the fact that sometimes, wind farms actually produce energy to excess - if they were operating a carbon removal system in addition to their power production, there would be less energy going to waste.

Simulations developed by researchers at Purdue University (Indiana, US) have been looking at how turbines can drag polluted air into their wake and funnel it into the ground for safe removal.

“As large, power-generating wind turbines rotate, they cause turbulence that pulls air down into the wakes behind them”, mechanical engineer Luciano Castillo of Purdue explained to Science News.

The researchers plan to describe their system at a meeting of the American Physical Society’s Division of Fluid Dynamics in Indianapolis on November 21.

According to a factsheet released by Purdue University’s Office of Technology Commercialization, the technology would use a liquid filter system that captures CO2 from the air blown across the wind turbine. This would absorb CO2 into a water-calcium hydroxide solution.

The carbon dioxide would then react with the calcium hydroxide, forming calcium carbonate, which could then be used for concrete production and other applications.

The researchers say this technology could have a large impact on “closing the loop” concrete production, which accounts for 8 per cent of global CO2 emissions.

Are there any downsides to the project?

In order for this to be a completely carbon neutral solution, the carbon removal system would have to be reliant on the energy produced by wind turbines.

Demand for energy can fluctuate and change - if there was a particularly demanding period of time for energy usage, critics ask whether there would be a back-up plan for the carbon capture.

The development of these wind turbines would also require a lot of forward planning. Although most turbines have a lifespan of around 25 years, making them a long-term investment, developing underground storage units would increase the scope of a wind farm’s build, whether on land or sea.

This Australian home is powered with repurposed laptop batteries