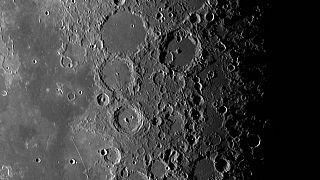 One year into a journey measuring millions of kilometres across space, NASA's Lucy spacecraft flew by our planet on October 15, capturing its first dazzling (and slightly haunting) images of the Earth and its natural satellite, the moon.

Lucy, who's on a 12year journey to explore Jupiter’s Trojan asteroids - the first mission of its kind - has to make three gravity-assisted manoeuvres to redirect itself towards the ancient, enigmatic satellites and gather enough speed to reach them.

A gravity assist, or swing-by, is a manoeuvre used that uses the gravity of a planet to alter the trajectory and speed of a spacecraft, saving propellent and cutting costs.

On October 15 and 16 it made its first gravity assist, taking some shots of Earth and the moon while flying by.

NASA released the images this week - and although there's no doubt that the James Webb Telescope has very few rivals in showing us the wonders of space, Lucy’s shots have given a reminder of the beauty and fragility of our planet.

This brooding image of Earth shows Hadar, Ethiopia, on the upper left corner of the image - the paleontological site where the fossilised remains of our 3.2 million-year-old human ancestor, Lucy, were found in 1974. NASA's spacecraft was named after her.

This view of the moon's lunar central highlands was captured by Lucy as she was travelling between the Earth and the moon, approximately 260,000 kilometres from the moon.

The perspective is one that is familiar to all of us - and yet the images it captured are ones that even the best Earth-based photographers could only dream of. It represents a 1,200-kilometre-wide patch near the centre of the last quarter moon.

The incredibly detailed image was achieved by combining ten separate 2-millisecond exposures of the same scene, with each pixel of the resulting mosaic representing approximately 1.3 kilometres.

A little later in its journey, Lucy captured another image of the moon, this time giving us a spectacular view of the terminator line of the last quarter moon - the line that marks the edge between day and night on the moon, sometimes referred to as the "twilight zone".

The image also allows us to see up-close the southern highlands of the Moon and its craters (near the bottom of the picture), and the ancient, lava-filled impact basin Mare Imbrium (near the top). On the left side of the image, you can see the Copernicus crater.

The last image of the moon captured by Lucy portrays Mare Imbrium, an ancient, lava-filled impact basin on the lunar terrain where the Apollo 15 mission made its landing in 1971 (the exact spot is in the lower-right part of the image).

The image is made of a single one-millisecond exposure, where each pixel equates to approximately 1.1 km.