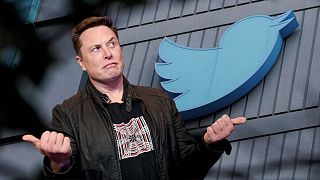 Many Twitter users are considering leaving the platform after Elon Musk's takeover.   -  Copyright  Canva and AP
By Giulia Carbonaro  •  Updated: 28/10/2022

After Elon Musk finally took over Twitter on Thursday night, months after he first announced his $44 billion (€43 billion) bid to buy the company, users of the platform seem split between two factions: those who have declared themselves ready to jump ship, and those who are happy the ship is finally about to go down.

Among the first group are the many who are worried Musk’s takeover will “open the gates of Hell,” as in the words of Washington Post’s journalist Taylor Lorenz.

Musk’s takeover started with his complaints about what he perceived as a lack of free speech on the platform, and users expect that loosening the app’s moderation policies would be one of the billionaire’s first moves.

Besides loosening the platform’s content moderation policies, he’s also widely expected to bring back from Twitter oblivion all those who had been temporarily or permanently banned from the service, most significantly former US president Donald Trump, who has been permanently suspended from Twitter for his role in the Capitol riots on January 6, 2021.

This scenario, which is likely considering Musk’s previous support for allowing Trump to return to the platform, has exacerbated divisions between liberals and conservatives on the app.

In some respects, Musk’s takeover has been highly politicised, with conservatives and right-wing users celebrating the Tesla CEO’s takeover as a triumph over what’s perceived as liberal wokery dominating the site.

“Elon Musk has taken control of @Twitter per @wsj and immediately fired the CEO and CFO. This is going to f****** amazing,” wrote conservative commentator Clay Travis on Twitter. “He also fired the executive who decided to censor the Hunter Biden story and banned Trump. This is amazing”.

“Elon Musk has indicated he will oppose Big Tech censorship and support free speech. That’s something all freedom-loving people can get behind,” wrote Tennessee’s Republican senator Marsha Blackburn.

On Friday, Trump posted on his Truth Social platform to say he won’t be rejoining Twitter even if he’s expected to be allowed to, although he added that he is “very happy that Twitter is now in sane hands”.

While conservatives in the US are celebrating and preparing themselves for their own takeover of Twitter, liberals are announcing they’ll boycott or quit the company.

On Friday, the hashtag #Mastodon was trending, as people talked of leaving Twitter for the rival app, a non-profit, decentralised social media platform that currently counts nearly 4 million registered users.

In April alone, after Musk announced he was going to buy Twitter and the company was forced to consider the offer for the sake of its shareholders, Mastodon gained 30,000 new users.

Mastodon’s interface is a bit like Twitter, with similar microblogging features supporting audio, video and picture posts as well as text.

But as a federated platform, Mastodon doesn’t have a single website for all users: users join “instances,” subcommunities where people talk about topics that interest them, a bit like an old-fashioned forum.

But whether a social media site like Mastodon - which is still unknown to most - might one day come to replace Twitter remains to be seen, and many are sceptical.

“Fight for Twitter's soul has been going on for years. The right kept flocking to other echo chambers... but always came crawling back. Big changes are coming and suspect we'll see a rush of left leaning people to other platforms. Also suspect reports of Twitter death premature,” journalist Otto English posted on Twitter.

Others agree that the threats to abandon Twitter might be just that, threats that aren’t actually followed through.

“'I'm quitting Twitter' is the new 'I'm moving to Canada,’” wrote David MacLean on Twitter, adding that people won’t actually leave Twitter because it’s the platform “where the action is,” where left-wing and right-wing users can confront each other.

The app experiencing a modest decline is likely, and it was expected regardless of Musk’s takeover. The “old” social media platforms - Twitter and Facebook - are experiencing a loss in relevance, with Mark Zuckerberg’s Meta continuing to lose billions.

This exodus of users might not be the loss it appears to be, however.

“We are hurtling in the wrong direction on climate. Though this can be a powerful organising space, it is a more powerful time wasting space. A more powerful space for depressing, demoralising + dividing us. Less Twitter might mean more planet,” tweeted professor of climate justice Naomi Klein on Friday.