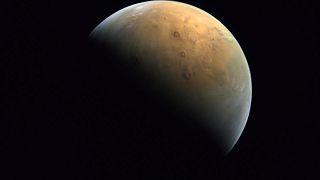 Evidence of life has never been found on Mars. But chances are bacteria could be dormant under the planet's surface.   -   Copyright  AP Photo
By Giulia Carbonaro  •  Updated: 28/10/2022

Is there life on Mars? Until now, this question, which has endlessly fascinated us all on Earth, had a definitive answer: not that we know of.

The surface of the Red Planet is dry and immensely cold with an average - of 63 degrees Celsius. As such, it isn’t hospitable to life, and its thin atmosphere cannot block cosmic radiation which would be devastating to any known living thing.

Scientists have to date never found hard evidence that life existed on Mars' surface. But research in the past ten years has revealed that some four billion years ago, Mars was more similar to our planet than its current conditions would suggest, leading to hopes that Mars will one day offer scientists a chance at studying how life begins and ends.

These hopes have just now grown stronger, as new research published on Astrobiology found that ancient bacteria could survive 280 million years if buried under Mars' surface - much longer than previously thought.

They discovered that the so-called 'Conan the Bacterium' (Deinococcus radiodurans), previously thought to be able to survive only over a million years on Mars, could endure the conditions under the planet’s harsh surface for much longer.

The study's findings mean that samples extracted from Mars and brought to Earth for research purposes could now be examined for these dormant bacteria.

The implications of the new research are profound; if scientists were to find these hearty, ancient bacteria, they would then be able to study their biological remains to discover how life evolved on the planet when water was likely still flowing through it.

But there's also a downside to the discovery.

If bacteria can survive Mars' harsh conditions when they are buried under its surface, then future astronauts and space tourists could accidentally contaminate the planet during their visits and, vice versa, Martian bacteria could contaminate our planet.

"Our model organisms serve as proxies for both forward contamination of Mars, as well as backward contamination of Earth, both of which should be avoided", said Michael Daly, a professor of pathology at Uniformed Services University of the Health Sciences (USU) and one of the study's authors.

According to the researchers, any contamination of Mars would be essentially permanent.

"This could complicate scientific efforts to look for Martian life", Daly said. "Likewise, if microbes evolved on Mars, they could be capable of surviving until the present day. That means returning Mars samples could contaminate Earth".

Why are young professionals becoming disillusioned with tech roles?