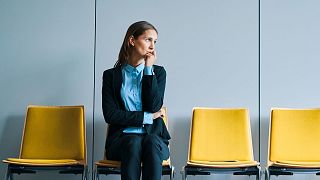 One in three people in the UK take a planned or unplanned career break during their careers.   -   Copyright  Canva
By Giulia Carbonaro  •  Updated: 26/10/2022

Alison Thomas had no doubt that after taking maternity leave she would return to her job as CEO of a domestic abuse prevention charity in the UK. She loved her role and had given it everything in the eight years she had spent at the company, so she planned to return to it after the birth of her second child.

But after discovering that her son had Down syndrome, she decided to quit her job to become her child's main carer.

"My role had been my priority and that is why I was successful at it, but now I had a different priority that I couldn't juggle, my career had to pause," she told Euronews Next.

Three and a half years later, Thomas decided to get back into the workforce. She was recommended for a role she was told was a perfect fit, but when she applied, she found that employers weren't even considering her.

"I didn't even get an interview and was given the feedback that other applicants had more relevant experience," she said.

"My confidence had taken a significant blow from both rejections and from not working for so long. Having not worked for an employer for over three years, I was doubting my value and questioning what I could offer anyone".

This self-doubt held her back from approaching other employers.

"I think this was additionally hard as I'd had such a good job prior to my break, I felt the expectation from others was that I would be working at that level – and I knew I couldn't straight away and didn't want to let people down," she said.

Her story would be familiar to many who have taken a break in their employment history, either by choice or necessity, and later found it difficult to reintroduce themselves into the workforce.

Ethical hiring company Applied and social enterprise Women Returners, which helps women return to work after career gaps, commissioned Censuswide to conduct a survey asking people based in the UK about their experience with job hunting after a career break.

What they found is that taking a career break is far from a rarity in the UK: one in three workers take a planned or unplanned break during their careers, and half of them feel like they have to lie to their potential employers about the gaps in their CVs.

In light of these findings, Applied and Women Returners have launched a new campaign calling to end the stigma surrounding career gaps.

They're asking employers to review CVs that only show for how many months or years a person covered each role, rather than specific dates which could reveal breaks between jobs.

Women most affected by career breaks

Career gaps can happen to anyone, at any stage of their lives. But what the Censuswide study found is that most of those who take career gaps are women, who identified childcare as the most common reason for taking a break from working.

Maybe unsurprisingly, as the burden of childcare is still disproportionately carried by women, these were also three times more likely than men to take a career break to take care of their children. Some 38 per cent of women who'd taken a break of six months or longer said the reason was childcare, against only 11 per cent of men.

Women were also more likely to drop off work to care for friends and family members, with 11 per cent of women listing that as a reason, compared to 8 per cent of men.

In total, one in five people mentioned mental and physical health as a reason to take a break from work, while 10 per cent said their career gaps occurred after they were made redundant from their previous role.

'Desperate' to get back to work

After the birth of her second child, Janna Scott couldn't go back to work at the London swimming association where she was employed, as she had done after her first pregnancy, because her newborn son had developmental needs that required her presence and her care at home.

"And it was about 10 years in the end of caring for him and getting him to a place at school where he could go full-time, which then meant that I could start to think about me a bit more," Scott told Euronews Next.

"I was desperate to get back [into work], but getting back became much more challenging".

On almost every application form she completed, she would have to explain the reason she had such a significant gap in her career.

"I had a standard paragraph that I would just cut and copy-paste into applications, and it did come up in a few interviews, particularly when they were doing meet-and-greet chats: 'What will happen if your son has to be homeschooled again?'".

The question used to annoy her, as "it showed a slight ignorance," she said, and had nothing to do with whether she could do the job she was applying for or not.

Why the stigma around career gaps?

On a human level, it's not difficult to understand and sympathise with someone who had to take a career break to care for a newborn, a sick friend or elderly family member.

However, in the workplace, hiring professionals seem to think that career gaps lead workers to lose their skills.

Applied surveyed some 200 HR professionals and employers and discovered that over a third of respondents believed career gaps led to "skill-fade" in workers, while 49 per cent were convinced that job applicants should explain their career breaks.

But from workers' perspective, career breaks aren’t at all the professionally destructive experience that HR professionals fear. Some 51 per cent of surveyed employees said that they acquired transferable new skills while off work, or further improved their existing skills.

Thomas ultimately decided that traditional employment wasn't going to work out for her and her need for flexibility and new challenges.

"Either I would need to give up my caring responsibilities to take on a role that offered the challenge and stimulus of my previous role, or I would need to take in a time that would be more flexible and fit my family arrangements. Neither appealed," she said.

My confidence had taken a significant blow from rejections and from not working for so long. I was doubting my value

Encouraged by the messages of support she received, she founded her own company, Unique & Loved, a brand that celebrates inclusivity.

"I am learning so much about myself and business that whatever the future holds, my belief in my ability is returning, and my confidence in the current working environment is increasing," she said.

"I do miss the camaraderie, and certainly that came with employment and I do keep my eye on what is available, but the options matching my skill set and flexibility requirements do not exist".

Scott, on the other hand, found employment through Applied, through a hiring process that focused on her skills and potential rather than on the gap in her career.

Is 'blind hiring' the solution?

Although both of these stories have happy endings, for many other workers the stigma surrounding career gaps can have a significant negative impact on their future.

Applied and Women Returners are hoping to change that through a small tweak in the way CVs are presented.

"We want employers to help level the playing field for all candidates. Unfortunately, the situation today is quite balanced in favour of employers who can just screen you out on something that they don't like on your CV," Khyati Sundaram, CEO of Applied and ethical hiring expert, told Euronews Next.

The whole concept of skills fading because of a career gap, which is very prevalent in the HR community, is a fallacy

"And we know this anecdotally and by some evidence, that if you had a three-year career break up, if you had your first or second child as a woman, you would struggle to return to work".

Applied and Women Returners are now asking organisations to change their application process so that candidates aren’t asked to specify the dates attached to their previous jobs, but only the total time spent in each role.

The campaign also recommends using a similar "blinding" technique for applicants' gender and name – which have also been proven to lead to discrimination during the job application process.

"The whole concept of skills fading because of a career gap, which is very prevalent in the HR community, is a fallacy. And that's what we want to ensure – that we try to stand against that and change it over the course of time," Sundaram said.

Applied and Women Returners found that by removing start and end dates in CVs and replacing it with years of experience, "call-back rates for interviews improved by about 15 per cent, which is significant," Sundaram said.

"So just by removing the dates, we are removing this bias that we have that if a person was away from the job market for three years or so, then they have no skills to bring to the table anymore," she said.

"We have to start looking at different kinds of ways to break that bias. And what Applied is trying to do is one of the solutions".