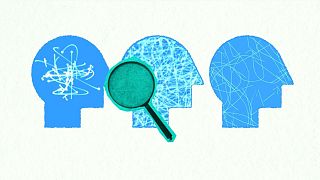 Scientists are harnessing the power of artificial intelligence (AI) for the early detection of mental health disorders such as depression and schizophrenia.

Unlike, for example, kidney disease, which is relatively easy to diagnose, conditions like anxiety or depression have no specific biomarkers that can be picked up with a simple test.

Patients with the same mental disorder can present many different symptoms, which can make it challenging for physicians to diagnose them early and accurately.

Scientists from Nanyang Technological University in Singapore are developing an AI-driven diagnostic toolkit that could help solve the problem.

AI’s ability to process large datasets efficiently is helping them spot the signs of various mental health conditions and determine whether a patient’s mental impairment will become more severe.

Dr Iva Bojic, a computer scientist and a key researcher in the project, told Euronews Next that mental health disorders "can be visible in very physical ways," and wearable devices are helping them pick up those signals.

Some of the biomarkers include heart rate, sleep patterns and energy expenditure, calories spent and the number of steps; “then we correlated those biomarkers with symptoms that we saw, and after a while, the model could learn,” she said.

For example, one of the signals the scientists picked up in their study is that the heart rate of people living with depression usually accelerates during the night hours, specifically between 2 and 4 am.

What we are doing is more of a screening tool for people... and then, hopefully, they can go into the process of care, where their condition can be properly managed.

The biomarkers are then complemented with a questionnaire to make a final assessment and determine which users in the sample are effectively struggling with depression.

The machine-learning model is able to make predictions for new users based on their biomarkers, correlating knowledge and labels learned from previously analysed biomarkers, and determining a fresh outcome: zero or one – healthy or unhealthy.

But of course, "nothing is bulletproof," said Bojic.

How the model predicts is not really binary, she explains. The software provides a percentage from zero to 100, "then it's basically about where we put the threshold. So are you going to say that depression starts above 50, or are we going to say that it starts around 80 per cent?"

What is the margin of error of the AI model?

The margin of error depends on the level of detail in the data structure, how clean and granular the data is, and how many hours a day the user used the fitness tracker.

Bojic estimated the tool’s accuracy is roughly around 80 per cent. "Then sometimes, if you are really, very rigid on the quality of the data, we can actually go all the way to 100 per cent".

"But there can be many limitations," she added – and interestingly, the error often comes from the human side.

Bojic explained that the questionnaire often poses a problem because depending on how the evaluator asks the question, they can get a different answer.

It also happens that users are not sincere, because of the stigma around mental health, and sometimes, quite simply, they are just not aware of their condition.

But despite the challenges, "there is some significant correlation between the physical symptoms and the knowledge that we extract. So definitely there's potential to be explored," she said.

"What we are doing is more of a screening tool for people... and then, hopefully, they can go into the process of care, where their condition can be properly managed".

"This tool is not perfect," she added. "So, it’s not about removing the need for professional psychiatric help, it’s about how useful it is going to be to help people, to help professionals spot people they would otherwise not reach".

Not to mention help professionals help patients as early on as possible. Research shows early detection of conditions such as depression and schizophrenia is critical to be able to prevent the disorders from escalating.

Bojic said one of the strengths of her team’s study, published in JMIR mHealth and uHealth, is that it looked at general populations, instead of focusing on people who were already clinically diagnosed.

What would become of this data?

How to proceed after someone has been identified with a risky likelihood of disease is still an important detail the researchers are working on.

"From a clinical point of view, how could they actually approach a person? Is it a good way to actually say directly, you know, ‘you are depressed’? How is that effective?" Bojic said.

"On the other hand, if the system has an error, and someone who is not depressed is told they are, how is that going to affect that person?"

Then there are thorny questions of ethics and privacy.

Should governments, agencies, or hospitals have access to this information? And how could they harness it to promote good mental health?

"There are many angles from where to approach it, a lot of considerations, ethical for sure, and privacy issues. All of that has to be taken into consideration before actually using this information in different premises," Bojic said.

Once those concerns are addressed, she believes AI could show big promise in the field of mental health.

"I really think that we can help people with the knowledge and algorithms that we've developed," she said.

"It's not just chasing some numbers".

For now, the team is focusing on spotting depression, but it hopes to extend it to other conditions such as dementia, loneliness, and schizophrenia.

This story was originally featured in the Good News roundup, Euronews’ weekly digest about what is going well around the world.