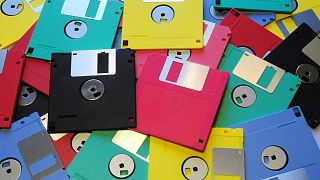 We’ve all heard about Gen Z’s not knowing what the save icon symbolises as floppy disks are long gone - or are they?

"The joke is, is that when a six-year-old girl runs up to her father with a floppy disk that she found somewhere, she said, 'Oh, look, Daddy, somebody 3D-printed the save icon," said Tom Persky, the owner of arguably the world’s last bulk supplier of floppy disks in California in the United States.

Persky receives new and used floppy disks from around the world.

"And here are a bunch of floppy disks and when we get them, we have no idea if they're new or used or what. So, we'll open this one up and sure enough here, used disks that we will reformat, put a fresh label on, and then hopefully resell," he said.

Before they’re resold, each floppy disk must be stripped of its data, which Persky does with his degausser, a machine with a giant magnet that removes all information from each disk.

The 73-year-old ex-software developer says he has a solid customer base who need secure and reliable means to store information.

"Floppy disks are very reliable, very stable, a very well-understood way to get information in and out of a machine. Plus, they have the additional feature of not being very hackable," he said.

According to him, some of his biggest customers are those in the embroidery, tool and dye business who need the disks for their manufacturing machines as well as the airline industry which still uses floppy disks for some of the avionics.

Even now, his eyes light up as he reaches into a cupboard and pulls out a true relic of the computer age: the 8 inch floppy disk.

"This is a floppy disk from the 1970s. And we have literally thousands and thousands of these," said Persky holding up the disk to compare it to the traditional 3.5 inch disk for comparison.

He is well aware one day he won’t be selling 500 disks per day and will eventually have to put them in history.

"I'll be here for as long as people continue to want to have these disks. But it's not forever," said Persky.

Will Elon Musk bring back Vine?