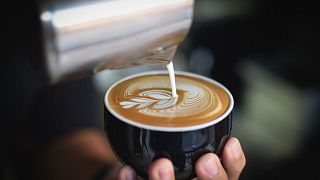 Surging inflation in Europe hasn’t spared one of the most-beloved simple pleasures in life: a cup of coffee.

The price of coffee across the continent has jumped by 16.9 per cent in August compared to the same month last year, according to Eurostat, making the black liquid goodness something of a luxury for millions of Europeans who are used to starting their day with a cup of coffee (often followed by a second, and maybe even a third).

But the bad news doesn't end here: cappuccino, macchiato, flat white and latte got it worse than a simple espresso or a black americano.

Fresh whole milk now costs 24.3 per cent more than it did last year, while fresh low fat milk has surged by 22.2 per cent. But the biggest price increase was that of sugar, which is now 33.4 per cent more expensive than it was last year.

If you never got used to drinking your coffee black, then now it’s the time to get around that acquired bitter taste if you want to save some money.

For millions of Europeans, these price changes are likely to make a big difference in their finances: Europeans are estimated to be the biggest consumers of coffee around the world.

But though no country in Europe has been spared by increases in the price of coffee, the situation isn’t quite the same across the entire continent.

Where is the most expensive coffee in Europe?

Coffee drinkers in Finland and Lithuania would have noticed by now that their daily cup of coffee is weighing on their pockets much more than it used to just a year ago. In the two countries, the price of coffee has jumped by 43.6 and 39.9 per cent respectively.

In the unfortunate top 5 countries which have suffered the highest coffee price increases are also Sweden, with a 36.7 per cent increase, Estonia, 36.4 per cent, and Hungary, 34.3 per cent.

Polish coffee lovers might soon be switching to drinking their coffee black, as the price of sugar there has gone up by 109.2 per cent this year, while Hungary saw the highest price increase in fresh low-fat milk, up by 51.7 per cent.

Where is the cheapest?

Luckily for Italians, the homeland of espresso has experienced the smallest increase in the price of coffee, with prices jumping by 6.6 per cent, followed by Ireland with 6.9 per cent and Malta with 9.7 per cent. Malta was also the only country not to report no change in the price of fresh milk.

In the top 5 for cheapest coffee, there are also Portugal, which saw a 10.5 per cent increase in price, and France at 11.2 per cent.

Adding sugar to a cup of coffee is cheaper in Austria, Sweden and Germany, where the price of sugar has jumped by only 1.9, 2.1 and 2.3 per cent respectively.

Greece: Shoppers not convinced over government scheme to cut prices