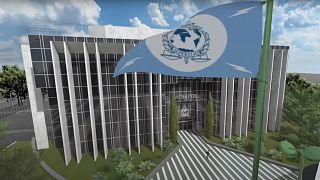 The tool also allows members of the agency to tour “a virtual facsimile” of the agency’s headquarters in Lyon, France.   -   Copyright  Interpol video (screenshot)
By Oceane Duboust  •  Updated: 20/10/2022

Will Interpol become the new sheriff of the metaverse? One thing is certain: it does not want to fall behind.

The global police organisation has just unveiled what it calls “the first-ever metaverse specifically designed for law enforcement worldwide”.

It says the move will help police forces across the world “interact with other officers via their avatars” and even take “immersive training courses in forensic investigation and other policing capabilities”.

“The metaverse has the potential to transform every aspect of our daily lives with enormous implications for law enforcement,” Madan Oberoi, Interpol’s Executive Director of Technology and Innovation, said in a statement.

“But in order for police to understand the metaverse, we need to experience it”.

The metaverse has been heralded as the next version of the Internet, where we would interact in cyberspace through avatars using augmented reality (AR) or virtual reality (VR) headsets.

Last year, Facebook’s parent company Meta unveiled ambitious plans to massively invest in the metaverse, with a new immersive platform called Horizon Worlds. But it quickly faced allegations of harassment and criticism over lack of moderation.

Interpol, which connects police forces across 195 countries, says it’s now setting up an expert group on the metaverse to ensure "this new virtual world is secure by design".

Cybercrime, from ransomware to online child sexual exploitation and abuse, is expected to rise in the coming years, according to its latest Global Crime Trend report.

"As transnational crimes and criminal networks evolve at an unprecedented pace, law enforcement are often left playing ‘catch up,’ with tools, processes, and procedures that may be outdated or inefficient," it reads.

By diving into the metaverse, Interpol wants to reverse the trend.

"Only by having these conversations now can we build an effective response," Oberoi said.