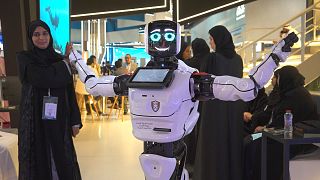 Flying cars and robot dogs, metaverse meetings, and taxis but without the drivers, are just some of the technology that was on show earlier this month at GITEX (Gulf Information Technology Exhibition) in Dubai.

Now in its 42nd year, GITEX has grown from a niche, special interest show into the world’s largest exhibition of its kind, hosting 5,000 companies from 90 countries.

Omar Al Olama, Minister of State for Artificial Intelligence, Digital Economy and Remote Working System told Euronews, “GITEX is the only place on earth that you can go to see companies from around the world flock to showcase the technology, the innovations. That progress is the biggest tech show in the world today. And it really is a testament to what the UAE and what Dubai is able to do when it takes a sector and focuses on. We are focussed a lot on technology and we're seeing that companies around the world are believing in this and are coming to bring their innovations here to first explore new markets, but at the same time to try to penetrate the UAE market as well.”

This tech show is a focus on the future and this year there was a push on the metaverse. The TRMW Foundation is based in Luxembourg and launched its product ‘ROOM’ at GITEX. It’s a new video service that creates Zoom style calls with a 3D video game twist. There is no need to download an app as it runs on a browser.

Stefanie Palomino, General Manager and Chief Product Officer, ROOM said, “Room is the most lifelike way to communicate with people in the Internet. So, what we are fighting basically is the topic of video conferencing fatigue, and so people enjoy again, to be together in the digital space.”

Another piece of tech with the wow factor was the Chinese prototype Xpeng X2. This futuristic flying car is made of carbon fibre and can carry two passengers while emitting zero carbon dioxide. As it’s designed with low-altitude in mind, the city will be its home, with a maximum flight speed of 130 kilometres per hour.

Eng Liu Xinying, Senior Scientist in Aerospace Engineering at XPENG AEROHT explained how they have got to this point telling Euronews, “First of all, we start from a very small mini copters, and then we gain our experience in the developments, we gain the weight of the whole design and also consider different safety requirements and mitigations in our system. I think now we spent eight years. At this point and to commercialise it for the next generation, I think that we still need two or three years.”