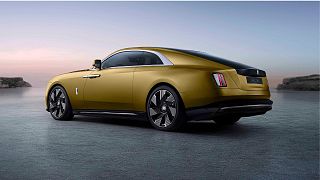 Rolls-Royce has unveiled its first all-electric car, and it says it’s already attracting more orders than it had hoped for.

The Spectre marks a new chapter in the luxury carmaker’s history, which has pledged to make its entire range fully electric by 2030 as the global automotive industry adjusts to government crackdowns on carbon emissions and combustion engines.

But Rolls-Royce says attention to detail and “perfection” remained its top priorities when designing and testing out its new electric super coupé.

“It is a Rolls-Royce first and then an electric Rolls-Royce second,” CEO Torsten Müller-Ötvös told Euronews Next, promising an effortless and “completely silent” feeling behind the wheel.

“We have learnt from our clients worldwide that the experience – to sit in a Rolls-Royce, to drive a Rolls-Royce shouldn't be in any way compromised. And we obviously listened and this car, I can tell you, is the Rolls-Royce of electric vehicles”.

The Spectre is now in its final phase of testing, but preliminary data hints at an expected range of 520 km and acceleration of 0-100 km/ph in just 4.5 seconds.

The all-aluminium frame of the Spectre integrates the 700 kg battery into the car's structure, allowing it to be 30 per cent stiffer than any previous model.

We are not in the car business. The reason for acquiring a Rolls-Royce is luxury

Rolls-Royce began testing the Spectre in September 2021 and claims it has undergone 2.5 million km of exhaustive testing through the Arctic as well as desertic areas in southern Africa.

“It is probably the most intense testing we have ever put on a Rolls-Royce,” said Müller-Ötvös. “And it is really to make sure that the car is pitch perfect and is a Rolls-Royce in every single detail”.

The company expects to deliver the first models to customers in the fourth quarter of 2023.

The unveiling of the Spectre fulfils a prophecy made by co-founder Charles Rolls in 1900. At the time, he had an electric vehicle (EV) called The Columbia Electric Carriage and became a big fan of the electric engine.

In an interview, he lauded the benefits of electric technology in cars and prophesied an era of EVs once the issue of charging technology and stations had been addressed.

Rolls-Royce says the design of the two-door Spectre was inspired by nautical design and contemporary art.

Like other models, the Spectre features the popular “Starlight Headliner” with hundreds of tiny lights that illuminate the car’s roof at night. And it goes even further with an option of thousands of stars lining the inside of the doors as well.

“You have the feeling of sitting right in the middle of stars,” Müller-Ötvös said of the experience. “We have put so much effort into every single detail”.

Most Rolls-Royce models are priced to bespoke customer requirements. However, Müller-Ötvös said the Spectre's price will sit between its Cullinan and Phantom models, starting at €400,000.

Its launch comes amid a cost-of-living crisis in Europe and much of the rest of the world.

However, Müller-Ötvös claims the wealthy customers of Rolls-Royce don’t appear to be affected, and it’s already sitting on “a pleasing order bank” for the Spectre.

He said many customers had already placed deposits even before seeing the car, and that the brand recently flew over 300 clients over to its UK factory in Goodwood to get a sneak peek.

“We are not in the car business,” Müller-Ötvös said.

“The reason for acquiring a Rolls-Royce is luxury,” he added, noting that the luxury industry as a whole was still going strong and that many wealthy clients had accumulated money throughout the COVID-19 pandemic.

“And there's also a different habit now, what I see with clients, that many thought you better live now and don't postpone that to later. And that, in combination also with rising inflation, makes people think it's great to invest now into an asset like a Rolls-Royce”.