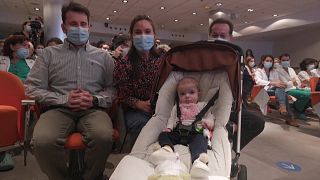 A research team in Spain has successfully transplanted an intestine into a 13-month-old girl.

The young girl Emma had intestinal failure, which prevented her intestine from absorbing nutrients from food.

She had received several operations before the transplant took place.

Organ transplantation for infants has particularly been challenging as there are far more recipients than donors.

Asystolic donation - or donation after cardio-circulatory arrest - is often considered a solution to the lack of donors.

But the intestine was an exception due to high risks of rejection and infection; 30 per cent of the candidates die on the waiting list.

The research team at La Paz hospital spent three years of research and trials to establish that such an operation is feasible.

Emma’s operation was the world’s first intestinal transplant from an asystole donor.

"It is important to emphasise, as director of the ONT (National Transplant Organisation), what this transplant represents, what it represents for Emma, but also what this transplant will represent for many children in Spain and in other countries around the world because we are really talking about a milestone, it is the first intestinal transplant from an asystole donor to be carried out in Spain and in the world," said Beatriz Dominguez Gil, Director of the Spanish National Transplant Organisation.

Emma is now at home with her parents. She also received a new liver, stomach, spleen, and pancreas.

"Emotionally, they also help our family a lot. We have had very hard times, it has been a rocky road and the truth is that they have helped us to keep our feet on the ground and we have moved forward and the truth is that here you have a little girl who is beautiful and eager to fight," said Emma’s father, Daniel.

Spain is a world leader in organ transplants, according to figures from the Global Observatory on Donation and Transplantation, taking up 5 per cent of organ donations in the world in 2021.