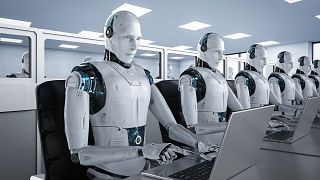 People who work alongside robots may be experiencing burnout over fears of their job being replaced by automation   -   Copyright  Canva
By Luke Hurst  •  Updated: 13/10/2022

People who work alongside robots may be experiencing burnout over fears of their job being replaced by automation, according to a new study.

Researchers found that workers in the US and parts of Asia feel insecure about their jobs because of robots, even in industries where robots aren’t being used.

They conducted six studies and analysed data from participants in the US, Singapore, India, and Taiwan, finding that working with industrial robots was linked to increased reports of burnout.

It was also linked to higher rates of workplace incivility, according to one of the studies which looked at 118 engineers employed by an Indian auto manufacturing company.

The researchers behind the study, which is published in the Journal of Applied Psychology, did say however that fears over losing a job to a robot were in many cases unfounded.

"Some economists theorise that robots are more likely to take over blue-collar jobs faster than white-collar jobs," said lead researcher Kai Chi Yam, an associate professor of management at the National University of Singapore.

"However, it doesn’t look like robots are taking over that many jobs yet, at least not in the United States, so a lot of these fears are rather subjective".

The researchers conducted six studies in total to reach their conclusions.

The study at the Indian auto manufacturing company involved the engineers answering daily surveys, and the study found a significant relationship between the use of robots and job insecurity.

This job insecurity was strongly linked to both burnout, and incivility at work.

Media reports on new technologies like robots and algorithms tend to be apocalyptic in nature, so people may develop an irrational fear about them.

Another study tested whether the prevalence of robots in a certain geographical area could predict the extent to which people tried to protect their job by looking for roles on popular job recruitment websites.

They conducted this test across 185 metropolitan areas in the US, using metropolitan-level data originally gathered by the International Federation of Robotics (IFR), and then organised and publicly shared by the Brookings Institute, an American research group.

They theorised that an association between the rising number of robots and an increased use of job search sites would imply greater job insecurity.

The results showed a strong association between areas with higher robot density and a subsequently higher interest in job search websites, “potentially because people are more insecure about losing their jobs.”

Another test involved 343 parents of students at the National University of Singapore who were randomly assigned to three groups.

The participants were then surveyed about their job insecurity concerns, with the first group reporting significantly higher levels of job insecurity than the two other groups.

The researchers report, however, that self-affirmation exercises were successful in alleviating fears around robot replacement.

An online experiment with 400 participants encouraged people to think positively about themselves and their human characteristics, and to write about the values that were important to them.

"Media reports on new technologies like robots and algorithms tend to be apocalyptic in nature, so people may develop an irrational fear about them," he added.

Some economists are optimistic that the rise of worker robots will create new jobs and roles for humans, while the World Economic Forum (WEF) estimates that at the current rate of change, up to 85 million jobs could be displaced by 2025.