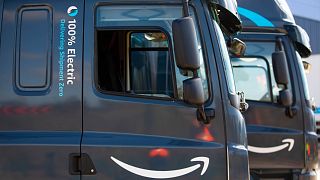 Amazon has pledged to spend over €1 billion to boost its electric fleet in Europe and cut the carbon footprint of its deliveries,   -   Copyright  REUTERS/Brendan McDermid (File)
By Euronews  with Reuters  •  Updated: 10/10/2022

Amazon plans to invest more than €1 billion over the next five years to roll out thousands more electric vans, trucks and cargo bikes across Europe as part of efforts to slash its carbon emissions.

The online retail giant said the investment would help its electric van fleet in Europe more than triple from 3,000 vehicles to more than 10,000 by 2025.

Amazon also aims to double the number of cities where it has so-called “micromobility hubs” enabling parcel deliveries on cargo bikes and on foot. It currently has such hubs in 20 European cities including London.

Amazon aims to reach net zero carbon emissions by 2040 - 10 years ahead of the target set by the Paris Agreement.

Chief Executive Andy Jassy said achieving this required “a substantial and sustained investment” with the transportation network “one of the most challenging areas” of the business to decarbonise.

"Deploying thousands of electric vans, long-haul trucks, and bikes will help us shift further away from traditional fossil fuels - and hopefully, further encourage transportation and automotive industries in Europe and around the world to continue scaling and innovating," Jassy said in a statement.

The company said that alongside EVs, it will invest in thousands of chargers at facilities across Europe.

Amazon's largest electric van order is for 100,000 vehicles from Rivian Automotive through 2025.

Although a number of large logistics firms - including package delivery companies United Parcel Service (UPS) and FedEx - have committed to buying large numbers of zero-emission electric vans and trucks, there are still not many available for purchase.

A number of start-ups are racing to bring electric vans or trucks to market and are facing increasing competition from legacy manufacturers like General Motors and Ford.