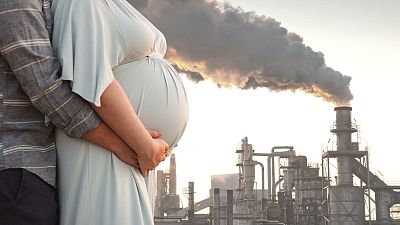 Air pollution particles and "forever chemicals" are reaching the brains, lungs and other developing organs of unborn babies, potentially affecting their health and fertility later on in life, new research shows.

Two new studies carried out in Europe show the extent to which man-made pollution can impact the health of future generations before they even take their first breath.

Scientists at the University of Aberdeen in the UK and Hasselt University in Belgium have found evidence that air pollution particles inhaled during pregnancy can cross the placental barrier and enter the foetus.

The findings, published in the Lancet Planetary Health journal, showed that tiny black carbon - or soot - particles can reach the foetus as early as the first trimester of pregnancy and get into the foetus’ vulnerable developing organs, including its liver, lungs, and brain.

"What is even more worrying is that these black carbon particles also get into the developing human brain," Professor Paul Fowler, of the University of Aberdeen, said in a statement.

"This means that it is possible for these nanoparticles to directly interact with control systems within human foetal organs and cells".

Black carbon is a sooty black material released into the air from internal combustion engines, coal-fired power plants, and other sources that burn fossil fuel.

According to the authors, exactly how these tiny particles affect our health remains poorly understood, although it’s believed to be due in part to the chemicals they are coated with during combustion.

A separate study, also published this week, found that women’s exposure to dangerous "forever chemicals" during early pregnancy could result in their children having a lower sperm count and quality later on.

So-called PFAS, or per- and polyfluoroalkyl substances, have been used for decades across a wide range of industries to make coatings and products resistant to water, heat, or stains.

It is possible for these nanoparticles to directly interact with control systems within human foetal organs and cells.

They’re known as "forever chemicals" because they don’t naturally break down and build up over time in humans and the environment.

Researchers have found them in breastmilk and more recently in rainwater in most locations on the planet, including in Antarctica.

A large Danish study now suggests that exposure to these PFAS in utero may be affecting the reproductive capacity of future generations, more specifically sperm count and quality.

The study, published in Environmental Health Perspectives, looked at the semen quality, testicular volume, and levels of reproductive hormones and PFAS in 864 young Danish men.

Blood samples from their mothers, primarily from the first trimester, were retrieved from the Danish National Biobank, and the levels of 15 PFAS were measured.

The study found that the sons who had higher levels of exposure to maternal PFAS concentrations during early pregnancy consistently had lower sperm concentration, lower total sperm count, and a higher proportion of nonprogressive and immotile sperm in adulthood.

"Results from epidemiological studies like this one cannot be used to say anything about individual risk, but from a public health perspective, even small changes in reproductive capacity can have a big effect - especially when so many people are exposed".

Sperm counts, quality and motility are key factors of infertility – a growing concern for couples around the world who are increasingly turning to assisted reproductive technology such as in vitro fertilisation (IVF) to have babies.

Recent research suggests sperm counts have been more than halved in the space of 40 years.

Scientists have considered a range of possible causes including lifestyles, tobacco consumption and air pollution, but many studies have recently focused on the role played by chemicals.

The latest Danish study adds to previous research linking foetal exposure to two types of PFAS – specifically PFOA and PFOS – and reproductive parameters such as semen quality and reproductive hormones.

But this one is the first to look for exposure to more than two PFAS compounds and to examine exposure during the first trimester of pregnancy, a key developmental period for a boy's testicles.

"A man’s reproductive capacity is largely defined in the first trimester of pregnancy when the testicles are developed," said Tøttenborg.

"It makes sense that exposure to substances that mimic and interfere with the hormones involved in this delicate process can disrupt normal development and have consequences for semen quality later in life".

The main strength of this study is its size, and the fact that it only included young adults aged 18 to 21 who were "unlikely to be worried about or aware of their fertility status" and unaware of their mothers' PFAS levels during pregnancy.

In other words, it was unlikely these men took part in the study because they were having trouble conceiving and were seeking answers, which would have biased the findings.

It should never be up to individuals to avoid certain chemicals. It is a public health problem to protect pregnant women and their future children

The authors also measured the concentration of PFAS in the adult men whose semen was examined but including that factor did not change the study's overall conclusion.

"The findings indicate that early PFAS exposure may contribute to explain the high prevalence of poor semen quality we are seeing today," the authors said in a statement.

They're now calling for further studies on maternal exposure to PFAS and reproductive function, including newer types of these chemicals and taking into account potential cocktail effects.

In the meantime, Tøttenborg told Euronews Next she hopes that authorities, with these findings in mind, will look at these chemicals more carefully going forward.

"It should never be up to individuals to avoid certain chemicals. It is a public health problem to protect pregnant women and their future children and should be treated as such," she said.