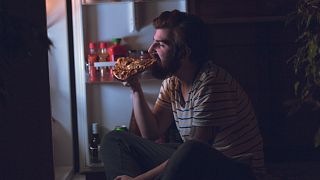 We suspected it for a while, and now it’s confirmed: no matter how much you might enjoy a midnight snack, eating late at night is bad for you.

A new study by Harvard Medical School investigators at Brigham and Women's Hospital in Boston, Massachusetts, US, has found that eating late at night increases hunger, reduce calories burning and is actually capable of changing the metabolism of adults who are overweight or obese, increasing our body fat.

Some 42 per cent of adults in the US are considered to be obese and, as a result, at risk of chronic diseases such as diabetes, cancer and other conditions.

It’s also a growing problem in Europe, where 59 per cent of adults are overweight or obese, including 8 per cent of children under five, according to the World Health Organization.

In a report published in May this year, the WHO found that obesity is causing 200,000 cancer cases and 1.2 million deaths each year in Europe alone.

Worldwide, some 650 million adults are estimated to be obese.

How is eating late linked to an increased obesity risk?

There are plenty of diets out there that recommend fasting after 6 or 7 pm, but until now the effects of eating late in the evening weren’t confirmed. Basically, we knew that a midnight snack was bad, but we didn’t know exactly why.

Now, thanks to the scientists in Boston, we have a much clearer picture of how late snacking affects our appetite, our energy expenditure and our fatty tissue.

The scientists studied 16 patients considered overweight or obese, and asked each of them to follow two protocols: one where they could only have scheduled, early meals, and another where they had the exact same meals, but four hours later.

It turned out that those four hours of delay could make a huge difference: in the 24 hours following their late-night eating, patients presented lower levels of leptin, the hormone that reins in our appetite by telling us we’re full. They also burned calories at a slower rate , and their body fat appeared to be prone to increase.

The details of the study were published in the journal Cell Metabolism.

The way the scientists made these findings is not for the faint-hearted: besides telling the researchers about their level of appetite, the patients provided small blood samples throughout the day, had their body temperatures and energy expenditure measured and some even had biopsies performed on their adipose tissue.

There’s something incredibly pleasurable and self-indulgent about a midnight snack, and some of us working late shifts might not be able to eat any time sooner. But now we know the real cost of those sneaky -night trips to the kitchen.