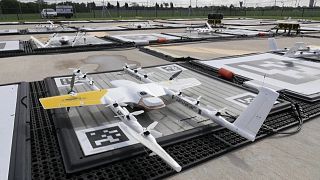 A drone lands and drops off a bag of snacks in the backyard of a Texas house. The bottle of soda has condensation beads on it – it’s still chilled.

Drone deliveries have finally become a reality in parts of the United States, and for some users, they arrive in less than 15 minutes.

Several drone delivery services including Amazon, Alphabet-owned Wing and Israeli start-up Flytrex have started operating in the country after receiving a green light from the Federal Aviation Administration.

Wing says it delivers by drone in about 10 minutes and that its services can help reduce road congestion.

"It's more environmentally friendly. These are all electric drones that use very little power," said Jacob Demmitt,  Wing's marketing and communication manager in the US.

"It's also significantly cheaper. You can have a pilot sitting in downtown Dallas, watching flights all over the entire metro (area) someday".

Tiffany Bokhari lives in Frisco, Texas. She first tested Wing's drone delivery app out of curiosity, and she did it again when she needed a band-aid.

It's now the third time a drone brings her the light goods she ordered from her smartphone – in this case, snacks and that cold soda.

"I think it's better to be delivered by drone versus car because it's helpful for the environment, you know. It saves gas, and money, and saves the environment," she said.

For now, Wing’s 4.5 kg drone can load food and small products weighing up to 1 kg.