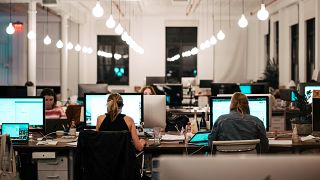 There has been a recent buzz around the concepts of "quiet quitting" - and "quiet firing" - on LinkedIn and beyond, and another work-related phrase is starting to have its moment now.

With many companies struggling to hire the right talent, and in the wake of the turmoil caused by the coronavirus pandemic, so-called "boomerang employees" are stepping into the limelight.

Boomerang employees are people who leave one place of work for another, before going back once again to the original employer.

Analysis of a global data set from HR analytics platform Visier found around a third of external hires are boomerang employees.

While there used to be some stigma around the concept of going back to a place you had previously left, recruitment experts say that the boomerang employee concept is most definitely nothing to be embarrassed about.

In many cases, there are big advantages for both the worker and the employer.

'Never slam a door behind you'

One worker who is now back at his old employer after being made redundant during the pandemic told Euronews Next "if I had been able to design it to work out this way, I would have done so".

Rob, who wishes not to be fully identified, worked for a big events company in the UK for nine years, managing events.

I'm earning a little bit more for three days a week than I was five days a week, and I have two days a week for other clients. It really has worked out.

As lockdowns forced live events to cancel, his sector was hit particularly hard, and along with around 130 people in his company, he was made redundant.

"They treated us with empathy, care, and dedication," he said.

"Some people responded badly to that position, but I made a conscious decision that I knew it was a business decision that had to be taken. I adopted a positive attitude throughout the process, as positive as I could, honestly believing that at some point I might end up working for them again".

And that’s exactly what happened. After spending around a year setting up his own consultancy and building a client base, he was called back in by his old employer as a consultant.

"I’m earning a little bit more for three days a week than I was five days a week, and I have two days a week for other clients. It really has worked out. There’s an element of luck, but also I think it’s that thing of never slamming a door behind you".

Rob said it was the third time he’d been made redundant in his career, and he has always left on good terms. At his current company, when he was made redundant, he sent emails to senior people saying he understood the decision, wished them luck, and even thanked them.

His situation reflects some of the findings Visier reported in their Boomerang Workers report this year.

They say the critical time for rehiring is around 13 months, with boomerang workers on average earning 25 per cent more when they return.

'They are typically the best employees'

While Rob was made redundant before going back to his old employer, many boomerang workers make the decision to leave themselves.

"If you’ve left the company well, it’s always a really positive experience to go back to a former employer and typically former colleagues after you've gone out into the market," he said.

"You may have also captured further experience and skills which can enhance the company you’re going back to".

Stewart said there are a number of boomerang workers at his company.

"They have had the chance to recognise how good you are over the other employers," he said, adding that this creates a deeper sense of loyalty in the worker.

When they come back, they are also very quick to integrate back into the company and with their former colleagues.

"I can tell you, they are typically the best employees," he said.

Stewart isn’t alone in having former employees come back to work for his company.

"We joke about our boomerang employees - especially post-career break - that I have an invisible string and my team keep coming back for more!" Victoria McLean, CEO & founder of the career consultancy City CV, told Euronews Next.

If you’ve left the company well, it’s always a really positive experience to go back to a former employer and typically former colleagues after you've gone out into the market.

She has seen a big growth in the boomerang employee trend in recent years. That’s partly down to generally high levels of employment, meaning businesses are struggling to hire talent and are therefore looking to rehire quality former employees.

But it’s also due to the so-called Great Resignation, which was ushered in by the COVID-19 pandemic and the subsequent changing expectations workers had about work/life balance.

"I have also seen, from our candidates, examples of people who left their jobs during the ‘Great Resignation’ when their aim was to get a better work/life balance, but they've found the grass isn't always greener and have gone back to their previous employers, recognising just how good they had it," she said.

For many boomerang workers, the return to their old employer can be overwhelmingly positive, she added.

"You've probably also gained a new perspective, fresh experience and you may be more qualified. You know the team, the systems, and the relationships and it’s likely that when and if you go back, it will feel like coming home".

'I do not regret leaving'

This is what happened to Sebastian Zuniga, who works as a Global Renewals Manager at HireVue in the US.

He left his role there to grow his skills in a different position at a different company, but he found the culture, mission, and leadership weren’t as good a match for him as those at HireVue.

“It was actually a goal of mine to return one day and I’m thrilled that it became a reality,” he said.

He returned to a new role and has since been promoted.

"I do not regret leaving," he said. "It allowed me to grow as a person and bring new knowledge and experiences back to HireVue that I didn't have before".

But McLean does warn that workers shouldn’t rely on being able to return to their old employer, even if they have left the company on good terms.

"If there's something in your current role you're not happy with and would like to change or improve, a better approach is just to be open with your employer," she said.

"Communication is key. And surely this is a lot simpler than making a move and then hoping to return".