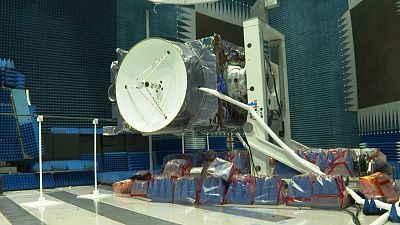 The largest planet in our solar system, Jupiter, is more than 11 times larger than Earth but is mainly made of gas, and its icy moons have long fascinated astronomers keen to find out whether any of them could host life.

A spacecraft is now almost ready to go all the way there to hunt for clues.

The European Space Agency (ESA) has been developing a probe to explore Jupiter and three of its icy moons - Ganymede, Callisto and Europa.

The JUpiter ICy moons Explorer (JUICE) is due to launch from the spaceport in Kourou, French Guiana, in April 2023. It will travel across our solar system to hopefully reach Jupiter in 2031.

Its aim is to provide the most comprehensive exploration of the giant planet and in particular of its moons, which may host habitable zones under their icy crusts.

"The main objective is to understand if there are the conditions for life to be sustained outside Earth," Manuela Baroni, Head of AIT and JUICE launcher interface at ESA, told the news agency AFP.

The research team has previously found that an ocean of liquid water exists under the surface layer of ice on these moons.

“We are going to try to characterise these oceans of liquid water a little better to check whether or not they can contain primitive forms of life. That's the ultimate goal of the mission," said Cyril Cavel, in charge of the JUICE project at Airbus.

Once successfully completed, this mission will also help understand the so-called miniaturised solar system in Jupiter.

In May, ESA said the JUICE spacecraft was fully integrated and set for the last rounds of testing at an Airbus Defence & Space facility in Toulouse, France.