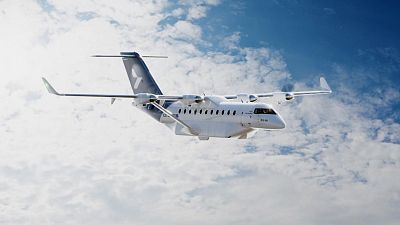 Sweden has set some ambitious climate goals for its aviation industry, having committed to making all domestic flights fossil-free by 2030 and all flights departing the country fossil-free by 2045.

No mean feat, to say the least, but in a Hangar near Gothenburg, a team of engineers from Heart Aerospace are busy at work to ensure this emission-free future can take flight.

Their current project is a 30-passenger plane called the ES-30, which is designed to have a fully battery-powered range of 200 kilometres.

"If you want to compare electric aircraft to conventional aircraft on range, well, we're not there yet," says Heart Aerospace’s CEO Anders Forslund.

"But what we can offer is low noise, zero emissions, which means that not only is it good for climate, but also for your local environment, for the pollution near airports".

Despite not yet having a working prototype, the company is already drawing interest from the likes of United Airlines and Mesa Air Group, which have ordered 200 aircraft.

In another show of support, Heart announced that Air Canada had also placed an order for 30 airplanes and invested $5 million (€5 million) in the company.

The aluminium frame that Heart is working on in a hangar is unlikely to ever take to the skies itself. Rather it will be used for ground-based tests for things like propellers and batteries before the company builds a flying prototype set for test-flights in 2026.

"It's very expensive to do tests or to make mistakes in the prototype because all the parts in the prototype are aeronautical parts. Here, it's not," explains Guilherme Albuquerque, who works in aircraft systems integration.

With its renewable electricity, short flight distances and sustainable mindset, aviation bosses in Scandinavia believe greener flight should take off in this region first.

"If not here, where else should be first with zero-emissions aviation?" asks Fredrik Kampfe, from the Swedish Aviation Industry Group.

"We also have a market in Scandinavia and a geography that simply fits very well. In northern Norway, we have these short routes of maybe 14, 15 minutes, up to 20 minutes between airports - that will be a perfect first market".