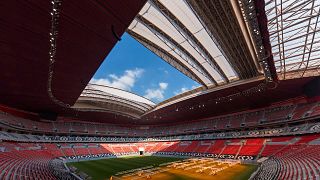 With less than 100 days to go until the kick-off of the Qatar 2022 FIFA World Cup, Euronews looks at the massive commercial benefits of the world’s biggest companies converging on Qatar. From Stadia to Software - we assess how the World Cup is driving advances in infrastructure, technology and sustainability.

The State of Qatar has spent $220 billion on building world-class infrastructure, including new roads, public transport, hotels and sporting facilities. The matches will be held in eight high-tech stadiums, ensuring maximum comfort for spectators.

And 1.5 million fans are expected to visit Qatar for the historic event, giving a boost to the tourism and food and beverage industry. Nasser Al Khater, is the CEO of FIFA World Cup Qatar 2022, and asked him about Qatar’s football journey,

"The past 12 years have been a very busy has been a very busy time for economic development, has really been, um, spurred and accelerated by the World Cup, but also rather has been, you know, in this mega master plan development since 2008, what we're looking at is really the benefits of it over the next 20 years."

"I've never seen a host being so ready so much in advance. All stadiums are finished. Infrastructure in terms of hotels and roads is being completed. So Qatar is ready. FIFA is ready, the world is ready. And after some complicated times with pandemics and others, we really need to come together again."

Qatar 2022 will make history by bringing the World Cup to the Middle East for the first time, welcoming millions of fans and teams from around the world and giving a boost to businesses and investors across the region.

Qatar's financial commitments into building an infrastructure capable of hosting a super event like the FIFA World Cup has given many companies a boost, especially in the field of sports technology.

One of them is SponixTech, a Qatar-based firm that provides immersive replay technology and virtual advertisements during live matches. In just two years, they’ve partnered with the FIFA Arab Cup and the Premier League. Mohammad Ali Abbaspour is founder and CEO of Sponixtech,

"The uniqueness of our solution is we are just using broadcast feed in our cloud servers. And we are sending back one feed or five, ten different feeds to the broadcaster or to the right holder in just less than 2 seconds."

FIFA earned $5.4 billion dollars of revenue from the 2018 World Cup. That was a 16 percent jump from its revenue in the 2014 tournament. But as a non-profit organisation, FIFA invests most of its earnings back into the development of football. In 2018, $4.3 billion dollars was directly invested back into football programmes.

FIFA generated more than $3 billion in revenue from television and broadcast licensing rights during the previous World Cup. The popularity of football around the world has fueled fierce competition among global broadcasters. FOX won a bidding war with rival ESPN, clinching a $400 million dollar deal with FIFA for television rights for this year’s World Cup.

The spending on advertising and marketing around the World Cup is set to hit a record high this year and experts say that its timing in the run-up to Christmas and New Year, gives Qatar 2022 the potential to provide the most unique experience for brands.

So, after 12 years in the making, all eyes will soon be on Qatar when it hosts the FIFA World Cup 2022 in November. The stage is now set for what promises to not only be an historic event in the region, but potentially a lucrative boost to Qatar’s economy for years to come.