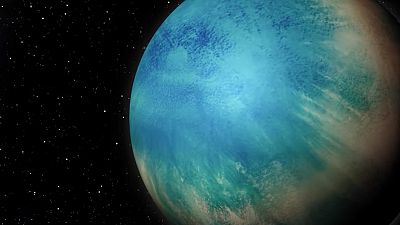 Astronomers have discovered what they believe could be a real-life "water world" – a planet completely covered by ocean.

Orbiting a star some 100 light years from Earth, the planet is in the so-called "Goldilocks zone" or "habitable zone” where its temperature would be just right for liquid water to exist on the surface.

Just like Earth, it would retain its liquid water, as the distance from its star means it isn’t too hot or too cold.

Named TOI-1452 b, the planet is slightly greater in size and mass than Earth, but due to its lower density compared to Earth, scientists think it may be covered by a thick layer of water.

Ocean planets are of particular interest to astronomers and space enthusiasts alike, as they are thought to be strong candidates for planets where life could originate or survive.

Astronomers working on the study have called TOI-1452 b one of the best ocean planet candidates discovered so far.

It was first spotted by NASA’s space telescope the Transiting Exoplanet Survey Satellite (TESS), which surveys the entire sky to find exoplanets around nearby bright stars.

TESS saw a slight decrease in brightness of a star in a binary star system every 11 days, with astronomers predicting from this data a planet about 70 per cent larger than Earth.

Astronomers from the Université de Montréal conducted follow-up observations from a telescope on the ground to confirm the planet type and its characteristics.

"This was no routine check," said Charles Cadieux, a PhD student at the Université de Montréal and member of the Institute for Research on Exoplanets.

"We had to make sure the signal detected by TESS was really caused by an exoplanet circling TOI-1452, the largest of the two stars in that binary system".

To work out the mass of the planet, observations were taken with an infrared spectrum telescope, the Canada-France-Hawaii Telescope in Hawai’i.

With more than 50 hours of observation, they estimated the planet’s mass at nearly five times that of Earth.

"TOI-1452 b is one of the best candidates for an ocean planet that we have found to date," Cadieux said.

"Its radius and mass suggest a much lower density than what one would expect for a planet that is basically made up of metal and rock, like Earth".

A prime target for the Webb Telescope

TOI-1452 b is thought to be rocky like Earth, but its lower-than-expected density is believed to be due to a much larger quantity of water than what we have on Earth.

While 70 per cent of planet Earth’s surface is covered in water, water actually makes up less than 1 per cent of our planet’s mass.

The astronomers' analysis found as much as 30 per cent of TOI-1452 b’s mass may be made up of water.

This is a proportion similar to some of the moons found in our Solar System, such as Ganymede and Callisto of Jupiter, and Titan and Enceladus of Saturn.

Publishing their findings in The Astronomical Journal, the team is already planning follow-up studies with the most powerful telescope in history.

The newly-launched James Webb Space Telescope (JWST) is in high demand, and the team behind the TOI-1452 b discovery is already planning to book some time to study their exoplanet.

It is close enough to Earth to allow astronomers to study its atmosphere, and it is also in a region of the sky that the JWST can observe all year round.