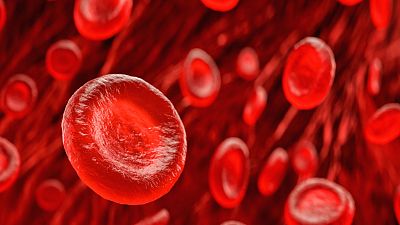 People with type A blood may be at higher risk of having a stroke before the age of 60 compared to other blood groups, researchers have found.

In contrast, those with blood type O are less likely to have an early-onset stroke, according to the new meta-analysis.

The research was carried out by a team led by scientists from the University of Maryland School of Medicine in the United States, who looked at the relationship between genetic characteristics such as blood type and their relationship to stroke.

To do so, they looked at data from 48 genetic studies on ischemic strokes in adults between the ages of 18 and 59. Ischemic strokes are caused by a blockage of blood flow to the brain.

In total, the studies included around 17,000 stroke patients and nearly 600,000 healthy controls who had never experienced a stroke.

"We were interested in trying to identify the genetic determinants of stroke,” the study’s co-principal investigator Braxton Mitchell told Euronews Next.

"For stroke, we've known for a long time that there's a big environmental component, but there's also a genetic component," said Mitchell, who is a professor of medicine at the University of Maryland School of Medicine.

To examine this further, he and his colleagues looked across people’s genetic profiles, and ended up finding a link between early-onset stroke and the area of the chromosome that includes the gene determining a person’s blood type.

Humans have four main blood groups, A, B, AB and O, and a person’s blood group is determined by the genes they inherit from their parents. Blood group O is the most common.

But although the researchers found associations between having blood type A and the risk of early-onset stroke, they emphasised that the increased risk was very modest.

There are other risk factors for stroke that are much more important, like hypertension and smoking, for example. So if we want to reduce our risk of stroke, those are really the factors that we should be paying attention to.

They stress that those with type A blood should not worry about having an early-onset stroke, or engage in extra screening or medical testing based on this finding.

"Clinically, we shouldn't be worried about our blood types putting us at high risk for stroke," said Mitchell.

"There are other risk factors for stroke that are much more important, like hypertension and smoking, for example. So if we want to reduce our risk of stroke, those are really the factors that we should be paying attention to".

He added: "Having said that, what we wonder about is whether if you have those risk factors, and you also have blood type A, does that make those risk factors even more powerful? We don't know that yet. But that's one of the things that we're looking at".

It’s still unclear as to why blood type A confers this higher risk, but researchers think it might have something to do with blood clotting factors.

Other studies have suggested that those with an A blood type have a slightly higher risk of developing blood clots in the legs - known as deep vein thrombosis.

"This sort of pro-clotting background of having blood group A probably puts you at higher risk for clotting-related diseases, of which stroke is one of them," said Mitchell.

One limitation of the analysis was the relative lack of diversity among participants, the majority of whom were of European ancestry, with researchers welcoming further follow-up studies on a more diverse population.

"So we may be missing some important variants by only looking at a small representation of ancestry groups".

Blood type linked to risk of other conditions

It’s not just stroke risk - other research has suggested links between blood type and the risk of developing other health conditions.

Those with the rarest blood type, AB, had the greatest risk.

Other studies have suggested people with type A blood have a higher risk of stomach cancer, compared to those with other blood types.

It’s worth keeping in mind though that although studies have shown a relationship between blood type and certain health conditions, we still really don’t know the causes of these relationships.

So if you have type A blood, how worried should you be?

A person can’t really change their blood type, Mitchell points out. And there are other risk factors for stroke that are more within a person’s control, like nicotine habits, blood pressure, alcohol use and amount of exercise.

Commenting on the findings, Clare Jonas from UK charity Stroke Association said the results were a "great step" towards better monitoring of risk factors for early stroke.

"The majority of strokes happen to older people, due to reasons we are commonly aware of such as high blood pressure, thickening of the arteries, or atrial fibrillation," said Jonas, who is Research Communications and Engagement Lead at the Stroke Association, which provides support to those who have suffered a stroke.

"The causes of stroke in younger adults aren’t as well understood, which makes them harder to prevent," she said in a statement.

"We don’t yet know why people with blood type A might be at increased risk of early stroke. This means we can’t yet develop targeted preventions for early stroke".

"However, this research is a great step towards helping healthcare professionals figure out who would most benefit from monitoring for other risk factors and being offered interventions to help reduce risk," she added.

Where in Europe is assisted dying legal?