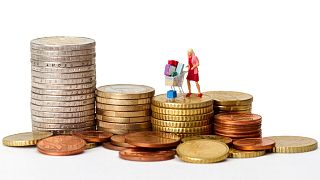 The amount of money eurozone governments are committing to help consumers and businesses cope with the energy and cost-of-living crisis is quickly approaching €300 billion.

According data compiled by Reuters and think tank Bruegel, the bloc's governments have already committed €282 billion - 2.3 per cent of their combined gross domestic product (GDP) - to relief measures and several have plans for billions more in the pipeline.

The following is a breakdown of the fiscal packages in the bloc.

The government presented on September 4 a third package worth €65 billion, bringing its total to €95 billion since February.

It includes benefit hikes and a public transport subsidy and is to be financed with a tax on power companies and by bringing forward Germany's implementation of the planned 15 per cent global minimum corporate tax.

Extra spending this year has been covered by better-than-expected tax income, which has allowed the government to stick with its target for a budget deficit of 5 per cent of GDP.

The Italian government has so far committed 52 billion euros and flagged plans for a new multi-billion euro package which one source told Reuters could be worth at least 10 billion euros.

The outgoing government has financed his packages with increased revenue from value added tax (VAT) on higher energy costs and by adjusting other areas of the state budget.

The government has refused to hike this year's fiscal deficit above an April target of 5.6 per cent of GDP.

The Spanish government says it has mobilised over €30 billion. That includes a first package worth €16 billion euros in March made up of direct aid and subsidised loans and a second €9 billion package in June targetting people with low incomes with pension increases as well as subsidies for rail and bus transport.

To limit the impact on the budget deficit, Madrid aims to partially offset the cost with a temporary tax on banks and large energy companies.

The government has offered general tax breaks and targeted support for low-income households at a cost of over €6 billion. It is preparing a further 16 billion euros in measures for next year, including a 10 per cent increase in the minimum wage and higher income-related subsidies for health care and rent, which will mostly be paid for by hiking wealth and corporate taxes and a special levy for oil and gas companies.

The government says it expects to spend more than €10 billion to help households, which it hopes can be offset with record tourism revenues in order to maintain its fiscal target for a primary deficit of 2 per cent of GDP.

The government announced a 6 billion euro package in June, which includes increased benefits to vulnerable groups and subsidies for energy-intensive companies. The measures are due to push the budget deficit to 4 per cent of GDP.