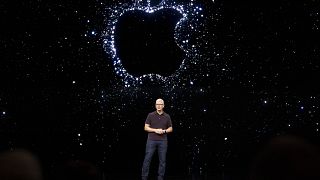 Apple unveiled its new iPhone lineup on Wednesday, along with an adventure-focused Apple Watch Ultra.

The latest device includes updates to the camera, including better low-light performance and a tool to make videos more stable.

The new iPhone will also have improved battery life and ceramic screens that are more durable.

Pre-orders start on September 9 and the smaller version will go on sale on September 16. But the iPhone 14 Plus won’t ship until October.

Watchers were keen to see if the latest iPhone would be more expensive than the iPhone 13 in light of rising inflation and economic turmoil.

Ultimately, the iPhone remains a crucial product for Apple. It opens the door to the Apple universe and drives significant value

"With household bills all heading in the wrong direction, it still represents a real test of consumer appetite in forking out for these latest shiny devices. As well as the true power of Apple’s brand in a tough economic climate with everyone tightening their belts," said Paolo Pescatore, tech, media and telco analyst.

"While these subtle improvements may get unnoticed, they remain paramount to improving the entire experience for iPhone users," he told Euronews Next, adding it makes sense to focus on what works best rather than move into nascent segments like foldables or smart glasses.

"Arguably why change a successful and proven formula? Ultimately, the iPhone remains a crucial product for Apple. It opens the door to the Apple universe and drives significant value," he said.

Another new upgrade is that all US iPhone 14 models will no longer have a physical SIM card and will be replaced with an eSIM that Apple says is better for security and can support multiple phone numbers.

"Moves to eSIM may seem like a huge blow to telcos, Apple’s most trusted channel. This makes perfect sense for all parties and a sustainable," said Pescatore.

"Take-up has been limited for now, but this is now set to change as Apple will kickstart consumer adoption. Telcos must now prepare for this and upgrade their systems to deal with this significant development".

The phones will also have a service called Emergency SOS via Satellite, which allows connection to emergency services if the user is outside of cellular or Wi-Fi range.

A new Apple Watch model has been unveiled.

The Watch Series 8 features a bigger display and more health features, including a body-temperature sensor, which has been specially designed for women to predict when they ovulate and their menstrual cycle.

It can also perform an ECG, measure your blood oxygen and track your sleep.

The Apple Watch also has a so-called "crash detection",  used in the event of a car crash. It can sensor a severe crash and contact emergency services and provide your location.

The watch will also be swim-proof and crack-resistant.

Apple has also a redesigned Apple Watch SE, which is cheaper than its main Series 8 at $249 (around €250) or $299 (around €300). It features a bigger screen, a heart rate notification and fall detection.

The tech company is marketing it as a device for children.

Apple has also unveiled the new Apple Watch Ultra, designed for long-distance running and exploring. It has dual frequency GPS and you can leave pins to let people know where you are.

Apple says that the watch can get as many as 60 hours of battery life so you can run a marathon and more with it and explore the most remote locations in extreme weather conditions.

A new model of Airpods is also coming, which will have more sensors and enhanced sound quality, as well as a noise-cancelling feature.

How tech innovations changed the world during Queen Elizabeth’s reign