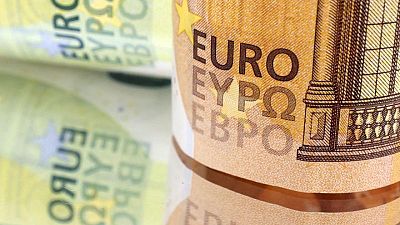 <div> <p>By Tommy Wilkes and Dhara Ranasinghe</p> <p><span class="caps">LONDON</span> – The hit to the euro zone economy and its currency from a deepening energy crisis is so severe that more aggressive monetary tightening from the European Central Bank will do little to stop the euro’s slide. </p> <p>The euro on Monday fell below $0.99 for the first time since late 2002 after Russia halted the supply of natural gas through the main pipeline to Europe, sending energy prices soaring and heightening fears about a supply crunch.</p> <p>The weakening currency will be front and centre for the European Central Bank meeting on Thursday since a weak euro – down 13% in 2022 — could make already record-high inflation worse through more expensive imports. </p> <p/> <p>Weak euro adds to <span class="caps">ECB</span> inflation headache https://fingfx.thomsonreuters.com/gfx/mkt/myvmnzggdpr/euro2.PNG</p> <p/> <p>Some policymakers have said that the bank must pay more attention to the euro than in earlier periods of weakness, because gas is priced in dollars and a weak euro amplifies the effects of soaring energy costs.</p> <p>Money markets price in an 80% chance of a supersized 75 basis point rate increase this week, but analysts think that would do little to help the currency. </p> <p>“This big rate hike will do nothing to rescue the euro. A recession is ahead and geopolitical concerns are uncontrollable,” said Agnès Belaisch, a strategist at the Barings Investment Institute. “In fact, the odds are high that rising interest rates coincide with inflation and recession in 2023.”</p> <p>Goldman Sachs on Monday forecast the euro to weaken to $0.97 and remain there for the next six months because demand destruction, caused by the gas crisis, will lead to “a deeper and longer contraction.”</p> <p>Capital Economics revised its forecast to $0.90 for next year – a 9% slump from current levels.</p> <p>The euro has been inversely correlated with gas prices for months, meaning it tends to fall when energy prices rise. Gas prices have soared 255% in 2022 and on Monday jumped 30%.</p> <p><span class="caps">RECESSION</span> <span class="caps">WATCH</span></p> <p>The euro zone is almost certainly entering a recession, with business activity contracting for a second month in August.</p> <p>The energy shock is taking a deep toll, while data suggests speculators have jacked up their bets against the currency.</p> <p/> <p>Euro short positions are building https://fingfx.thomsonreuters.com/gfx/mkt/xmvjoallapr/euro1.PNG</p> <p/> <p>UniCredit estimates that in the five years before the <span class="caps">COVID</span>-19 pandemic, the EU imported about 400 billion euros worth of oil and gas annually. </p> <p>If oil prices held at $100 a barrel, the euro at parity and natural gas prices at 100 euros – five times higher than the last five years’ average — the cost would jump to 600 billion euros, or 6% of <span class="caps">GDP</span>, calculates UniCredit’s Erik Nielsen. </p> <p>Economists and currency analysts reckon the economic pain will be even more severe than anticipated just a few months ago. </p> <p>“The euro zone narrative is shifting. A few months ago it was: “there won’t be recession.” Recently it shifted to: “there’ll be recession, but it’ll be shallow,” Robin Brooks, chief economist at the Institute for International Finance, said on Twitter on Monday. “This weekend we began to make the final shift: “we’re heading for deep recession.” Euro is going to fall a lot more.” </p> <p>Still, some say the <span class="caps">ECB</span> could at least stall euro depreciation with big rate hikes in the months ahead.</p> <p>“The <span class="caps">ECB</span> can arguably help slow down euro weakness but it is not clear it can lead to sustainable euro appreciation,” said George Saravelos, global head of FX research at Deutsche Bank.</p> <p><span class="caps">INFLATION</span> <span class="caps">PAIN</span></p> <p>The euro has suffered far less against other currencies than against the dollar, and sterling too has not been shored up by a ramp-up in expectations for more aggressive hiking.</p> <p>A trade-weighted index followed closely by the <span class="caps">ECB</span> last month fell to its lowest since February 2020, but it was lower throughout 2015 and 2016 without the <span class="caps">ECB</span> intervening.</p> <p>The impact of a falling euro on inflation is also not as big as many think, said SwissRe’s head of macro strategy Patrick Saner. He cites official data to show that a 10% decline in the euro’s nominal effective exchange rate leads to an increase in consumer price inflation of 40-100 basis points a year later.</p> <p>But as Saner notes, “even marginal effects are not exactly ideal currently”.</p> <p>Inflation has been driven by energy prices, so European producer prices are soaring. </p> <p>Deutsche Bank’s Saravelos points out that the consumer price inflation-based euro effective exchange rate is close to record lows, but the producer prices-based index is near record highs.</p> <p>That means euro zone competitiveness is weakening fast – a terms of trade shock that will further hurt the economy. </p> <p/> </div>