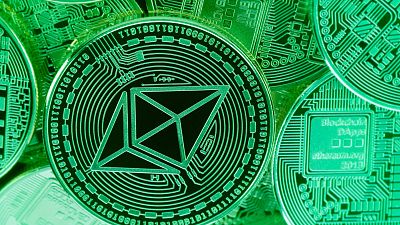 The cryptocurrency has been working to shift to the proof-of-stake model, which uses less energy to mint tokens and verify transactions.   -   Copyright  Canva
By Pascale Davies  •  Updated: 11/08/2022

Ethereum, the second-biggest cryptocurrency by market value, just passed its final test before it pushes ahead with its Merge upgrade that it says will make it greener and therefore make it more competitive with Bitcoin.

Ethereum was created almost a decade ago and has been mined through a proof-of-work mechanism. The system works like a competitive numeric guessing game and the first person to solve the puzzle is awarded a fixed amount of cryptocurrency.

But it requires a global network of computers to run at the same time when a transaction takes place and therefore more energy.

The cryptocurrency has been working to shift to the proof-of-stake model, which uses less energy to mint tokens and verify transactions by allowing users to leverage their Ether.

Not only is it more environmentally friendly but it is also said to make transactions faster.

Ansgar Dietrichs, a researcher with the Ethereum Foundation, said it was “another successful test” in a post on Twitter.

The final test happened on Wednesday evening. The test network, called Goerli (named after a train station in Berlin), works by simulating the main network that will be launched.

It allows developers to test the software and make final changes or fix bugs before the updates are deployed on the blockchain.

The crypto mining industry has serious environmental ramifications but some in the industry, such as Ethereum, are trying to reduce carbon emissions.

The University of Cambridge estimates that Bitcoin alone generates 132.48 terawatt-hours (TWh) annually, which is greater than the annual energy usage of Norway in 2020.

Meanwhile, in the United States, where over 35 per cent of Bitcoin mining takes place since miners flocked from China after it banned the process in 2021, creates 0.85 pounds of carbon dioxide per kWh.

Merge is expected to be deployed in September but the exact date is yet to be confirmed.