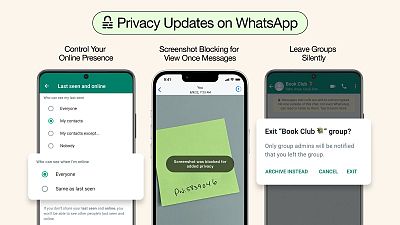 WhatsApp is making changes to give people more privacy and control, with a slew of new features to be rolled out to users soon.

Users of the Meta-owned messaging app will be able to leave group chats silently, choose who can see them when they’re online, and prevent screenshots from being taken of "view once" messages.

"New privacy features coming to WhatsApp: exit group chats without notifying everyone, control who can see when you're online, and prevent screenshots on view once messages," he said.

"We'll keep building new ways to protect your messages and keep them as private and secure as face-to-face conversations".

If you’re in way too many group chats but feel embarrassed to leave, there’s good news; soon you’ll be able to avoid social awkwardness by exiting the chat without notifying everyone.

At the moment, WhatsApp alerts members of a group chat when someone leaves or is removed. But with the new change, which will start to be rolled out to all users this month, only group admins will be notified if someone leaves.

WhatsApp will also introduce the ability for users to select who can and cannot see when they’re online. This new feature will start rolling out to all users this month.

Another new feature will be the ability to block screenshots for the platform’s "view once" messages.

Users can already send ephemeral photos and videos, which disappear from the chat after they’ve been opened. WhatsApp said it would soon be enabling screenshot blocking for these messages.

"We’re testing this feature now and are excited to roll it out to users soon," the platform said in a blog post.

In addition, WhatsApp also announced that users will now have much more time in which to delete messages they regret sending.

"Rethinking your message? Now you’ll have a little over two days to delete your messages from your chats after you hit send," WhatsApp announced on social media.

This is much longer than the one hour or so that people have previously had to change their minds.