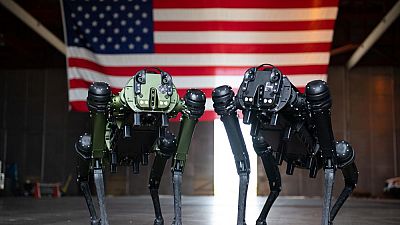 Under a gargantuan American flag, a US army serviceman is standing proudly between two dogs.

But the dogs are not your average military canines: they are shiny robots 75-centimetres tall, 32kg in weight and look like they could easily outrun the man should they suddenly turn against him.

The picture was shared by the US Space Force, a branch of the US army responsible for all space projects and American satellites, after it successfully tested the robot dogs for patrolling duties at its station in Cape Canaveral in Florida, US on July 27.

The dystopian, metal version of the man’s best friend - officially called Vision 60 and created by Philadelphia-based manufacturer Ghost Robotics - was reportedly good at guarding the space base during the test.

It’s a result that makes the US Space Force confident that the four-legged robots will be able to take over certain repetitive security tasks, meaning the jobs become fully automated.

The daunting robot dogs - which can be commanded by a person or run autonomously on their own - are made to recreate the qualities of military canines, without the need for training or treats - and without the dogs’ signature loveable qualities.

"They’re unstoppable, with the ability to get right back up from any slip, fall, or failure and keep moving using our proprietary blind-mode operations," manufacturer Ghost Robotics writes on its website.

With their arched posture and headless metal body, the robots look nothing like their natural equivalent. If anything, they look like they’re straight out of an episode of the dystopian British TV show Black Mirror, as many on social media have pointed out since Ghost Robotics revealed the four-legged robots.

"Don’t go petting these dogs," says a well-intended pun on the website of the US Defense Visual Information Distribution Centre, and they’re right: these robot dogs were made for surveillance purposes, not for cuddles.

The US Air Force had already said in 2020 that it had started testing the use of robot dogs as part of the surveillance system of its bases.

In February, it was announced that US Border Protection forces were working to deploy the Ghost Robotics’ creatures to surveil the country’s border with Mexico, in an effort to increase control on migration.

But the news was heavily criticised by civil rights activists, as well as members of the public, who found the deployment of the robot dogs to repel migrants hoping to find a better life in the US a little too dystopian and inhumane.