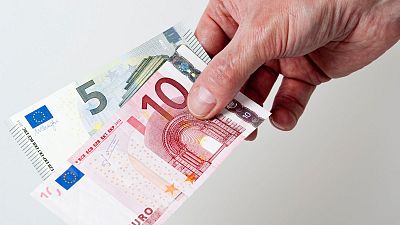 The pandemic may have accelerated the digitisation of payments, but amid record levels of inflation and the soaring cost of living, could cash be making something of a comeback?

In the United Kingdom at least, it seems that people are now turning to cash to manage their budgets. That’s according to the UK Post Office which recently saw record levels of cash withdrawals over its counters.

Last month, the organisation handled a record £801 million (€951 million) in personal cash withdrawals, up almost 8 per cent month-on-month and up over 20 per cent year-on-year.

In total, over £3.3 billion (€3.9 billion) in cash was deposited and withdrawn over Post Office counters. This is the first time figures have crossed the £3.3 billion threshold in a single month in the Post Office’s 360-year history, according to the organisation.

It attributes this turn to cash to more Britons taking staycations in the UK, as well as turning to cash to manage their budgets "on a week-by-week basis and often on a day-by-day basis".

The Post Office also processed over 600,000 cash payouts last month for people eligible to receive energy bill support from the UK government. This totalled around £90 million (€107 million), said the organisation.

"Our latest figures clearly show that Britain is anything but a cashless society," said Post Office Banking Director Martin Kearsley.

"We’re seeing more and more people increasingly reliant on cash as the tried and tested way to manage a budget".

Cash use plunged during COVID

These figures may seem particularly surprising amid a general decline in cash use accelerated by the COVID-19 pandemic.

It’s easy to spend money on a contactless card without really thinking about it, so some people use cash to help them spend more mindfully.

"Cash use has been declining over the last ten years, with a particular drop during the pandemic as many retailers encouraged contactless payments and businesses such as pubs and hairdressers closed," Adrian Buckle, head of research at UK Finance, a banking industry body, told Euronews Next.

In Europe, the picture has similarly been one of a broad long-term decline in the use of cash for transactions, although the situation is a little more mixed.

Cash is still the most popular payment option among eurozone citizens for day-to-day transactions at the point of sale or person-to-person payments, according to the European Central Bank (ECB).

But from 2016 to 2019, the share of cash transactions decreased by 6 percentage points on average, said the ECB. In some countries, such as the Netherlands and Finland, this decrease was even sharper (17 and 11 percentage points respectively).

Meanwhile a eurozone-wide ECB survey published in July last year concluded that the pandemic had caused a "significant increase in demand for cash as a store of value, but a decrease in the use of cash in transactions".

The survey also saw 40 per cent of respondents reporting that they used cash less frequently than before COVID-19.

Fear of contracting the virus was given as a major reason for using cash less with 38 per cent of survey respondents mentioning a fear of being directly infected from banknotes, while 33 per cent pointed to a fear of being infected through hand contact or being close to the cashier.

Given a wider downward trend of cash use in general, the Post Office’s latest cash withdrawal spikes are perhaps more to do with other factors, such as a lack of access to ATM machines in the UK as well as seasonal holiday peaks, say experts.

More people have had to turn to the Post Office to withdraw money amid a decline in the number of ATMs in the UK, argues Sarah Coles, a senior personal finance analyst at Hargreaves Lansdown.

August is also an expensive month due to the holiday season, and as more people are spending the summers closer to home, people take cash out to cover these trips in the UK.

"Cash withdrawals will soar around Christmas and the summer holiday period because that’s when we’re spending our money," Coles said.

"More people spending the summer closer to home means we’re taking the cash out to cover holidays in the UK rather than paying for all-inclusive overseas".

Cash can still make it easier to 'spend mindfully'

However we can also expect to see more people turning to cash to help manage their budgets, Coles adds.

"It’s easy to spend money on a contactless card without really thinking about it, so some people use cash to help them spend more mindfully," she said.

"Others find it easier to work when they can physically see how much cash they have left during the month".

But this isn’t the start of a cash comeback as such, says the analyst.

"We wouldn’t expect this to be the beginning of a wholesale return to cash,” she said. “Its use has been in long-term decline, and during the pandemic more people have become accustomed to spending on cards, so new habits have become embedded".

"It’s much more likely to be an annual peak".