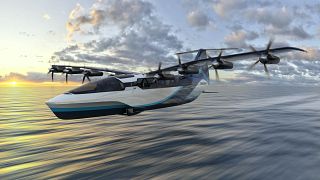 Image shows a concept render of REGENT's seaglider which they hope will be carrying commercial passengers by 2025.   -   Copyright  REGENT
By Euronews and Reuters  •  Updated: 08/09/2022

An all-electric seaplane that aims to replace ferries may offer the aviation industry the first truly sustainable commercial airliner, according to its US developers.

The "seaglider" is a new class of vehicle, bridging the gap between ferries and aircraft, offering high-speed coastal transport with zero emissions.

"They're for high-speed, low-cost, totally sustainable regional transportation," he added.

Ground effect aircraft harness the cushion of air created by flying within a wingspan of the surface of the waves, much like a pelican or many seagulls, which gives the vehicle the high speed of an airplane with the low operating cost of a boat.

"We represent a vehicle that is an order of magnitude faster than ferries, 6 to 10 times faster than ferries and half the cost of an aircraft. And it beats the door-to-door time on both and completely eliminates emissions," Thalheimer said.

How are seagliders different?

Seagliders differ from past ground effect aircraft due to their use of hydrofoils, distributed electric propulsion, and aerospace fly-by-wire controls. Together, these features enable safe harbour operations, increased wave tolerance as well as a comfortable passenger experience.

Built to the same safety standards as all modern aircraft and watercraft, seagliders will be regulated as maritime vehicles with pilots being recruited from aviation and nautical sectors.

"A critical part of bringing this new mode of transportation to market is not only selling the vehicles but building the ecosystem, making sure the docks are ready, that the charging infrastructure is there, that the operators themselves have financing to purchase these vehicles and lease these vehicles," said Thalheimer.

Thalheimer said they already have orders for nearly 400 seagliders worth around $7 billion (€6.8 billion) and expect their first 12-seater Viceroy model to be carrying commercial passengers by 2025.