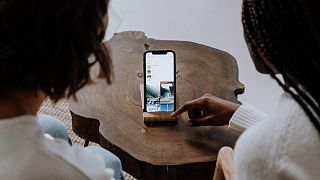 Users of the social media platform TikTok were being made into "unofficial ambassadors" to market unhealthy food brands.   -   Copyright  Canva
By Luke Hurst  •  Updated: 26/07/2022

Users on TikTok are being encouraged to market unhealthy food and drink products by their manufacturers, according to research in the British Medical Journal.

By turning them into unofficial "brand ambassadors," the brands are able to reach wider audiences with their marketing.

The authors of the study, published in the open access journal BMJ Global Health, say they have shown "TikTok is an emerging source of unhealthy food marketing".

As of September 2021, TikTok had an average daily user base of around one billion people.

The app - in which users can watch or create short videos - is hugely popular with children, who are highly influenced by their food preferences, purchases, and requests, based on exposure to online marketing.

The authors of the study say the findings show a need for stronger policies to protect children from the harmful impact of this type of marketing on their diets and their health.

In an attempt to assess the effect of unhealthy food and drink marketing on TikTok, the researchers looked at all the content posted by the accounts of the 16 leading food and non-alcoholic drink brands as of June 2021.

Our study has shown that TikTok is an emerging source of unhealthy food marketing, including that created by users at the instigation of brands.

Of the user-generated content instigated by the brands through hashtag challenges, total collective views for challenges ranged from 12.7 million to 107.9 billion.

Although they accept the study is observational and cannot establish causality, they warn that "analysis of a sample of brand-relevant user-generated content created in response to these [hashtag challenges] showed that branded hashtag challenges are effectively turning users into, in TikTok’s words, 'unofficial brand ambassadors'".

They also found videos posted by users who "seem to have been paid," such as influencers, attracted nearly 10 times as many likes per video as those that didn’t appear to be paid for.

In a statement to Euronews Next, a spokesperson for TikTok said: "The safety of our community is a top priority, which is why we have clear Advertising Policies on what is and isn't allowed to be advertised on TikTok. Our policies explicitly state that ads for HFSS foods should not feature a specific call to purchase and should not be aimed at users aged 16 years and under".