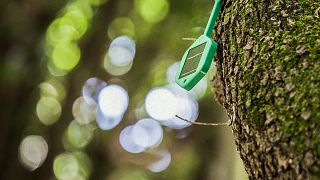 On the Italian island of Sardinia, a region devastated by forest fires in 2021, authorities are pinning their hopes on an array of ultra-early wildfire detection sensors to prevent the same kind of catastrophic event occurring again.

The sensors, which use Internet of Things (IoT) technology and operate without the need for cellular coverage, are installed on trees to detect gas during the smouldering phase of a fire, before it fully takes hold.

The aim is to reduce the reaction time of fire services to within the critical first hour in the hope that they can contain the blaze before it spreads uncontrollably.

“Think of it as a smart forest,” said Reuben Kingsland, an IoT and cloud specialist at Vodafone Business.

“Those sensors talk to each other across the forest and connect back to this, which is the gateway that sits at the edge of the forest”.

Connecting to a cloud-based alert centre means this is a much faster-acting solution to the problem of wildfire detection than using cameras or satellites.

“The detections that are done here are at the smouldering stage, so much earlier on, and you can detect a fire within minutes rather than in hours or days,” he added.

The innovative “smart forest” is the result of a partnership between Vodafone Business and Extreme E, the off-road electric race series that aims to draw attention to the impacts of climate change and the solutions we can all contribute to.

“One of the biggest things happening in climate change at the moment is forest fires across the world and ultimately, the solution which we're deploying will prevent forest fires from happening in the future,” said Kingsland.

Wildfires emitted 1.76 billion tonnes of carbon globally in 2021, which is equivalent to more than double Germany's annual CO2 emissions, according to the European Union's Copernicus Atmosphere Monitoring Service.

Globally, the wildfire emissions total wasn't the highest since 2003, but Copernicus said such emissions were likely to increase as the impacts of climate change unfold.

This microplastic-eating robot fish could help clean up the ocean