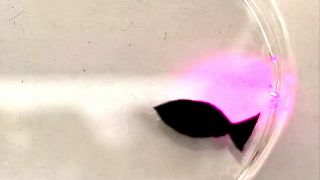 Researchers in China have found a novel way to combat ocean pollution – by developing little robot fish that eat microplastics.

Soft to touch and just 1.3 cm in size, these bots can already suck up microplastics in shallow water, according to a team of Chinese scientists from Sichuan University in southwestern China.

Microplastics are the tiny particles that break off from bigger plastic items such as bottles or synthetic clothing, and that are being found virtually everywhere on Earth, threatening the environment as well as animal and human health.

The tiny particles have been making their way into the food we eat and the water we drink, and have also been found in human blood, lungs and even in unborn foetuses.

Scientists in China are now hoping to get the robot fish to collect microplastics beyond the surface of the water, at deeper levels and provide information that analyses marine pollution in real time, said Wang Yuyan, one of the researchers who developed the bot.

"We developed such a lightweight miniaturised robot. It can be used in many ways, for example in biomedical or hazardous operations, such as a small robot that can be localised to a part of your body to help you eliminate some disease”.

The black robot fish is irradiated by light, helping it to flap its fins and wiggle its body.

Scientists can control the fish using the light to avoid it crashing into other creatures or even ships.

If it happens to be eaten by other fish, it can be digested without harm as it is made from polyurethane, which is also biocompatible, Wang said.

The fish is able to absorb pollutants and heal itself even when it is damaged. It can swim up to 2.76 body lengths per second, faster than most artificial soft robots.

"We are mostly working on collection. It is like a sampling robot and it can be used repeatedly," Wang said.

Studies show 11 million tonnes of plastic end up in the ocean each year and that could triple by 2040 unless production and use of throwaway containers are reduced.

Can smart sensors on trees protect our forests from wildfires?