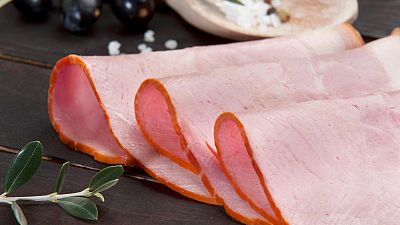 Nitrite salts are a type of additive widely used in cured meats to extend the shelf life of processed meats and give boiled ham its pink colour.   -   Copyright  Copyright: Canva   -
By Josephine Joly  •  Updated: 12/07/2022

A new scientific report from the French health agency ANSES has confirmed a link between the nitrates in ham and charcuterie and the development of bowel cancer.

Nitrite salts are a type of additive widely used in cured meats such as ham, bacon, and sausages, to extend the shelf life of processed meats and give boiled ham its pink colour. These can include E249, E250, E251, and E252.

In 2015, a World Health Organization report classified processed meat as carcinogenic because curing - by adding nitrates or nitrites or by smoking - can lead to the formation of potentially cancer-causing chemicals.

Last February, the French parliament approved a bill aiming to gradually reduce the use of nitrite in cured meats and ordered a review of the potential health risks by the end of June.

That review, carried out by France’s national health safety agency ANSES and published on Tuesday, has confirmed a link between these additives and the risk of colorectal cancer, also known as bowel cancer, stating “more than half of exposure to nitrites comes from the consumption of charcuterie, because of the additives used in preparing it”.

The findings also confirmed “the existence of an association between the risk of colorectal cancer and exposure to nitrites and/or nitrates, whether ingested through the consumption of processed meat or drinking water”.

“The higher the exposure to these compounds, the higher the risk of colorectal cancer in the population,” the report reads.

“Other cancer risks are suspected, but the available data do not, to date, allow the conclusion of a causal link. The agency recommends that further research be carried out in this area to confirm or refute these relationships”.

To limit their exposure to nitrates and nitrites, the French health agency advises consumers to “limit their consumption of charcuterie to 150 grams per week” and “eat a varied and balanced diet, with at least five portions of fruit and vegetables per day”.

The end of pink ham?

As a result, the French government has now 12 months to outline a trajectory for reducing or phasing out the preservative.

French centrist lawmaker Richard Ramos, who has been at the forefront of the fight against these chemicals, is already prepared to call once again for their ban.

“There is a link between colorectal cancer and nitrates in charcuterie, so we must ban nitrates,” Ramos said.

Currently, 90 per cent of all cured meats include nitrites but some of the biggest firms such as Nestlé-owned Herta or Fleury Michon – both really popular in France – are already experimenting with nitrite-free products.

However, the nearly 300 small to medium-size companies in the sector would struggle to manufacture their products without the use of nitrites, as lack of the preservative would reduce shelf life and increase the risk of bacterial infection.