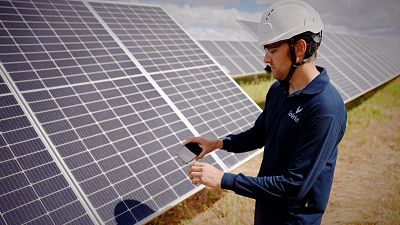 Europe has vowed to cut its reliance on Russian fossil fuels by 2027 by scaling up renewable energy. This transition away from oil and gas was already a key goal before the war in Ukraine as the EU seeks to become climate neutral by 2050. But how realistic and affordable are the latest plans?

Europe needs to reduce its dependence on Russian fossil fuels as well as tackle climate change.

The European Commission has come up with its action plan - REPower EU - to end its dependency by 2027. This includes scaling and speeding up renewable energy.

It’s estimated that it will cost 210 billion euros, with major investment needed. This is where InvestEU, the EU’s flagship investment programme steps in.

Working in partnership with the European Investment Bank, it has a guarantee of 26 billion euros from the EU - which seeks to reassure investors. It is expected to bring in more than 370 billion euros in public and private financing.

Its investments focus on four areas: sustainable investment, innovation, social inclusion and job creation. And at least 30% of these must contribute to making Europe carbon neutral.

Part of the REPowerEU plan is to double Europe’s solar power capacity over the next two and a half years and Spain is one country where InvestEU is funding solar plants.

Between Valladolid and Salamanca, there are solar panels as far as the eye can see. The area is home to seven solar parks, built since 2020, thanks in part to InvestEU.

Silvia Alonso Guijarro, from solar energy company Solaria, told Euronews: "Spain is a great place to build these solar panels, solar plants, because we are one of the countries with more hours of sun per year. These seven solar photovoltaic plants have a capacity of 261 megawatts, it means that (they) produce 477 gigawatts/hour of energy per year."

That amount of energy is enough to provide electricity to over 120,000 households. The project was made possible thanks to a partnership between public and private investors, with the European Investment Bank (EIB) playing a crucial role in helping to generate that finance.

The total cost of the project was 189 million euros. Of that, the EIB put 54 million euros on the table, either as a loan or guarantee mechanism, while also providing an additional 14 million euros as an intermediary.

It meant over a third of the total cost of the project was already covered, providing enough reassurance for private investors to fund the remaining 89 million.

The EIB's bureau chief in Spain, Fernando Torija, says such guarantees are vital.

"We are betting on the future of these companies. So that tells something to other investors, that are perhaps investing in the company, whether they are financiers, whether they are equity holders, and puts the company on the map saying, okay, sort of ‘I have a quality stamp from the EIB’."

InvestEU’s original goal was to spearhead a green and digital economic recovery. But the war in Ukraine and sanctions against Moscow, mean the capital will be directly channeled to help end Europe’s reliance on Russian gas and oil.

"Our intention is to continue developing projects. We’re working also with the EIB for a larger financing and a larger package of projects. The crisis with Ukraine. Well, I think, it's put on the table the real needs of Europe. We are absolutely reliant on other sources of energy that we don't have in Europe and we need to be aware, how important is energy for us. And the only way to solve this situation is with renewable energy, because, this is an emergency. It has to be not in four or five years - that will be too late to be able to develop all this power. In one, two years maximum."

For more on the EU's efforts to cut its dependency on Russian oil and gas, Real Economy's Naomi Lloyd spoke to the European Union's Commissioner for Energy, Kadri Simpson.

"Is it realistic to think that you can end dependency on Russian fossil fuels by 2027?"

"We do our utmost to get rid of this dependency even faster, as fast as we can. And REPowerEU is the plan how to replace Russian imports with alternatives. And we have reached out to several trustworthy trading partners. But this is not enough. We don't want to replace fossil fuels with other fossil fuels 100 percent. And that means that where we can we will replace natural gas with renewables. We will prioritise electrification in building sector, but also in transport. And on top of that, we will prioritise savings."

"You talk about ending dependency on Russian fossil fuels, but you're looking to import oil and gas from other countries. Won’t that just lock us into new dependencies?"

"We plan to replace only one-third of Russian imports with other fossil fuels. So yes, we will diversify our supply routes. But parallel to that, we are also accelerating our own green transition. Where we can replace fossil fuels with renewables, we will do so."

"Can you talk us through the plans for scaling up accelerating renewable energy within REPowerEU?"

"There are some ways how we can promote renewables very fast, for example, to rooftops. So according to our proposal, all the new built buildings should have rooftop panels. The biggest bottle-neck is permitting. Right now It might take as long as seven years to get permit for offshore wind park. But the European Commission has made a proposal, the right that we call ‘overriding public interest’. That shortens the permitting period significantly."

"You've calculated that to end dependency on Russian fossil fuels will cost €210 billion. Can Europe afford this?"

"If we keep in mind that in previous years, each year we paid approximately 100 billion euros to Russia for oil, gas and coal imports. Then it makes sense to replace that dependency. We do know that member states do still have unused recovery funds, so there are loans...worth 225 billion that member states can use for green projects. Financing is a key. InvestEU is a very useful tool at our disposal, because in the period 2020 to 27 we will be able to mobilise approximately €372 billion."