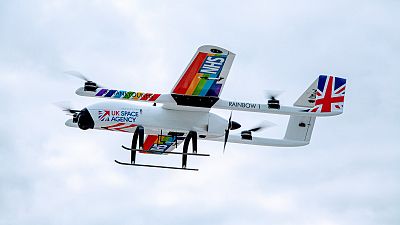 The NHS hopes drones will enable doctors to fly drugs and medical equipment from anywhere in the country.   -   Copyright  Apian / PA Media
By Josephine Joly  •  Updated: 06/07/2022

Drones will transport doses from the pharmacy at Portsmouth Hospital University NHS Trust to St Mary’s Hospital on the Isle of Wight, where staff will collect and distribute them.

Announcing the major trial on the health service’s 74th birthday, NHS chief executive Amanda Pritchard said cancer patients in England would be the first in the world to benefit from the new deliveries, in partnership with tech company Apian.

“Delivering chemo by drone is another extraordinary development for cancer patients and shows how the NHS will stop at nothing to ensure people get the treatment they need as promptly as possible,” Pritchard said in a statement.

NHS England officials said chemotherapy is difficult to transport as some doses have a short shelf life, so as well as saving time and money, the new delivery method will offer a better option for cancer patients living on the island, many of whom have to travel to the mainland for treatment.

“We are still at a relatively early stage but the use of drones to transport medical supplies is a concept that has radical and positive implications for both the NHS and for patients across the UK as well as the Isle of Wight,” said Isle of Wight NHS Trust CEO Darren Cattell.

The drones will be able to carry up to 20 kg of doses, and each delivery will replace two car journeys and one hovercraft or ferry journey per delivery – saving carbon emissions and contributing to improving air quality for patients and the community.

“This project marks a very important first step in the construction of a network of drone corridors connecting hospitals, pathology labs, GP surgeries, care homes, and pharmacies up and down the country,” said Alexander Trewby, Apian’s CEO.

After the Isle of Wight, the drone programme is expected to be trialled in Northumbria, in northern England.

The drones are set to make their first flight in the coming weeks and, if successful, will lead to drones being used for similar drops elsewhere.

Reacting to the news, the UK’s health secretary Sajid Javid said: “I want England to become a world leader in cancer care, and using the latest technology to deliver chemo by drone means patients will have quicker, fairer access to treatment no matter where they live”.

Monkeypox symptoms are changing and virus ‘could be mistaken for STI’