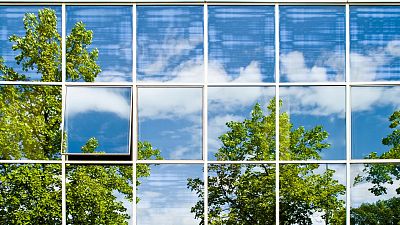 From remote working to climate dividends, here are the top tips for businesses trying to reduce their carbon emissions   -   Copyright  Canva
By Pascale Davies  •  Updated: 01/07/2022

Making a business greener and more sustainable has been shown not only to reduce energy costs, but also boost a company’s bottom line and employee morale. Yet, research has also shown that many businesses do not really know how to proceed.

As of this year, under the EU’s Green Deal, European businesses with a staff of over 500 are required to demonstrate they can comply with new green reporting rules brought into force at the start of the year. This includes publishing operating costs from activities covered by a green taxonomy classification system, which defines environmentally sustainable activities.

But almost half the 300 European businesses surveyed by PWC said they were not prepared for the EU Green Deal.

Euronews Next spoke to experts to find out how businesses can become greener and why it is important.

“I think for decarbonisation, for any business it really starts with the data,” said Ellen Moeller, Europe chief of the climate tech software start-up Watershed, which helps companies such as Twitter, Wise and Spotify cut their carbon emissions.

“Ultimately if you're going to decarbonise the business, you can't do that unless you know where the carbon lies,” she told Euronews Next, adding that most companies think that most carbon emissions come from business travel when in fact they’re mostly generated by data centres.

Moeller said after setting realistic goals, one of the first steps is usually to implement clean energy.

“It sounds basic, but it's actually not something that most businesses are yet thinking about,” she said.

The German software and cloud computing giant SAP began reducing its greenhouse gas emissions in 2008, much earlier than many companies. And instead of becoming net zero by 2050, which is the EU’s Green Deal plan, it wants to be climate neutral by 2030.

Ultimately if you're going to decarbonise the business, you can't do that unless you know where the carbon lies.

He explained this means using only renewable energies in SAP’s data centres but also reducing the emissions of SAP’s software products that are sold to customers so that the software they purchase connects to SAP’s own datacentres and green cloud.

The circular economy and remote work

Schmid also says a circular economy is the way for businesses to become more sustainable.

“You need to connect the consumer brands with the retailers and with the waste management companies, with the recyclers, with the chemical industry and share data there in order to create transparency and to think about designing products in a way that you don't have any waste at all,” he said.

“The circular economy is the way to go and there's a strong connexion to climate action”.

Allowing employees a hybrid way of working from home and in the office is another way to cut emissions, argues Schmid.

“During the pandemic we have seen how significantly our emissions dropped by less business travel and less commuting, and hybrid meetings and conferences will partially be the future,” he said.

As for smaller businesses who may not have as many resources to switch to renewables or do not own their buildings, Moeller said there are different options depending on their scale.

Big changes such as switching to renewables can then spark smaller changes, she added, citing how one fintech company Watershed worked with subsequently wanted to start introducing recycled plastic into their cards. Even at Watershed, she said rather than giving out free gadgets at their events, everyone had to bring in their own t-shirts and get the company logo printed on them.

Businesses no matter the size can also help fund the technologies that may reduce carbon emissions.

Watershed offers a marketplace of carbon removal partners who are actively developing technologies to permanently remove carbon from the atmosphere.

But Moeller said carbon capture technology is in its early stages and that funding is critical.

“If you're asking companies to set targets, specifically net zero targets, it’s likely removal is going to be a part of how they're going to actually get there. And then that kind of increases the overall investment in that space,” she said.

A start-up that lets anyone fight climate change

But it is not just businesses that can help scale the Green Tech start-ups. Time for the Planet is a French start-up that allows anyone to become a shareholder, including citizens and companies.

It works by matching these shareholders, entrepreneurs and larger businesses with the engineers and scientists who have the ideas on how to cut greenhousegasses but do not know how to develop them.

“The innovation that we need right now to change the globe already exists. But the problem is that they [scientists and engineers] don't scale and they don't scale because innovators are not entrepreneurs,” Arthur Auboeuf, co-founder of Time for the Planet told Euronews Next.

The profit that is generated is then re-injected into new green tech companies, so shareholders receive climate dividends in return, which can help the companies who invest meet their climate goals.

In the two years since Time for the Planet launched, it has attracted over 50,000 investors, including large businesses, and has raised more than €10 million.

“What we have seen really quickly is that when you're not a billionaire or a president, it's really hard to have a real impact,” said Auboeuf.

“Me and my business partner came to the realisation companies could be the perfect tool for citizens to have the biggest impact, because by definition, companies are changing the way we are living”.

And so the pair are now steering a company that can let anyone help in the fight against climate change.