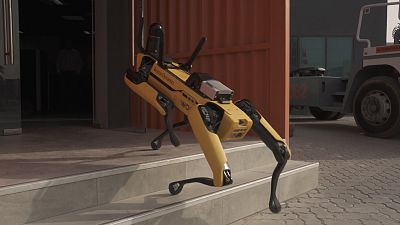 Robots are fast becoming a part of our daily lives and Dubai is using its position as a future-thinking city, driven by technology, to become one of the smartest cities in the world. A city where robots are set to play an increasingly important role.

Robotics is already impacting several vital industries, from manufacturing and surgery to security and deliveries.

“We’ve been on this journey for the last 20 years, where robots are enabling digital services to provide extra levels of comfort to the citizens of the city… Because of that layer of infrastructure, now we can start benefiting from having robots exist within our societies to give us services.”

Healthcare is one key area where robotics is providing essential assistance.

Dr. Yaser Saeedi, a Consultant Urologist and Robotic Surgeon at Dubai Hospital, is the first Emirati trained in robotic surgery in his specialty of urology. He currently uses a fourth-generation robotic system developed by NASA. The Da Vinci Xi is considered the most advanced system currently available.

Dr. Yaser revealed the technology helps surgeons perform complex procedures, with advantages such as minimally invasive surgery and increased accuracy with the help of robotic arms.

Matthias Krause, General Manager of DG World revealed, “There has been a significant increase in interest of Robotics, especially in the Boston Dynamics robotic dog. We have seen nuclear authorities looking into use cases. We have seen the police investigating massively, looking into how they can use it for or for civil different tasks, for crime scene monitoring and plenty of other uses and ideas. We had contact with Dubai Customs here which looked into advanced monitoring and repetitive monitoring of areas. So there was a lot of these kinds of applications, which more or less came from the customers.”

We want to create and build new cities for the future. The cities are actually based around AI rather than based around traditional buildings. A conscious city where the city actually thinks for itself through AI.

Chris Roberts
Board Chairman of Singularious and Group CEO of Eltizam

Singularious by Arious Holding is taking robotics and AI to the next level, a step beyond a smart city.

The group is helping design and develop the world’s first conscious city in the UAE and is set to redefine how we build communities going forward.

Chris Roberts, the Board Chairman of Singularious and Group CEO of Eltizam, explained: “We want to create and build new cities for the future. The cities are actually based around AI rather than based around traditional buildings. A conscious city where the city actually thinks for itself through AI. This is something that will have a dramatic effect when it comes to lifestyles, when it comes to how we actually maintain and how we manage cities going forward.”

“In most smart cities, what you really have is a sort of disparate collection of intelligent devices doing particular things,” he told Euronews. “They're not unified into an overall cognitive system. And that's really the goal with the conscious city, [it’s] city level intelligence in the service of the individuals living in the city.”

AGI and the future

Dr. Goertzel also expects Artificial General Intelligence with the same capabilities as humans, to make the transition from the research lab into universal deployment in the next 3-4 years.

“I think having humanoid robots to share our everyday environments with us, just gives us a very natural way to go back and forth with the overall AI systems behind the scenes in our environment. I think that's going to be a much more natural way to interface with our environments going forward than, you know, typing in a phone, speaking into a phone or using an Alexa or something.”