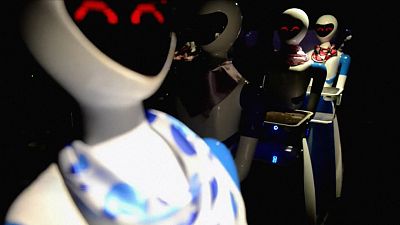 Machine automation has been rising rapidly since the 1960s. And Artificial Intelligence has increased the ways that robotics can enhance our lives. In recent years, even the most ‘typically human’ interactions are being mechanized.

Take going to a restaurant for example. Robots are now being used as waiters and cleaning staff, but there’s one restaurant in Paris that’s using a different recipe for automation.

Since the Covid crisis, the hotel and restaurant industry has been experiencing an unprecedented global employment crisis. In France, it has lost nearly 10% of its workers. So, could robots be a solution to this shortage?

Imagine if a robot replaces the chef? In a Paris restaurant, this future is very much in the present. A robot named Pazzi prepares and serves up to 80 pizzas per hour without any human intervention.

The process is simple and transparent: the customer orders at an automatic kiosk before the robot's articulated arms flatten the dough, spread the sauce, add the ingredients - all of them organic - and place the pizza in the oven. The pick-up is done with a QR code.

"The biggest technical difficulty was mastering organic products," says Sebastien Roverso, Co-Founder of Pazzi. "Dough is a living substance, there are yeasts. The product has characteristics that aren't constant. Sauces can have varying thicknesses. So it was extremely complex to develop a technology capable of managing any type of ingredient, while respecting the products."

“Robots can perform cooking tasks much more easily, more quickly and to a higher standard than a team of kitchen workers," says Philippe Goldman, Ceo of Pazzi Robotics

"That's the advantage of robotics, which already help in numerous sectors. There is no reason why they shouldn't be used in the fast-food sector."

Although this technology does come at a cost of around €300,000, the founders say using robots will allow chefs to spend more on quality ingredients.

The service industry is just one sector seeing a high rate of automation. In fact, the World Economic Forum projects that human workers are being replaced by robots faster than we think.

At the current pace, up to 85 million jobs could be displaced by 2025.

But the organization also believes that automation will create more jobs than it removes. Predicting that a staggering 97 million new roles will be needed over the same timeframe.

And as companies race to stay ahead, global spending on robotics is set to hit $242 billion dollars as soon as next year.

We need to lower are two things. One is the total cost of ownership and the total cost of integration and that calls for simpler, leaner robots that don't need a lot of ancillary equipment to perform certain tasks.

There are firms focused on figuring out how robots and humans can work together rather than simply taking our jobs. One company at the forefront of automation is ABB. Marc Segura is the President of the Robotics Division at ABB.

He points to two factors pushing the world towards faster robotization.

"E-commerce has been one," he says. "The other one has been 'co-bots', 'co-bots' and their drive into making robotics accessible, but for a wider number of companies, notably small and medium-sized enterprises. Because what we need to lower are two things. One is the total cost of ownership and the total cost of integration and that calls for simpler, leaner robots that don't need a lot of ancillary equipment to perform certain tasks. So, lean robots with ease of use, robots affordable and easy to deploy. This is really happening. This will help many other companies adopt robotics and benefit from the profits they bring."

The need for the human touch remains

So, whether you work in a shop, factory or office - having affordable ‘co-bots’ as co-workers could become the norm. For the millions of us who may feel nervous about losing our jobs to robots one day, it’s not all gloom and doom - there are experts who believe that most of us humans will still be relevant for some time to come.

Human interaction is not at risk to be automated because it's all about our human experience.

Nahia Orduna is the author of the book ‘Your Digital Reinvention’.

"I'm convinced that robots won't steal our jobs," she says. "85 million jobs will be displaced by a shift of labour between the machines and the humans. But 97 million jobs are going to appear. And these are the new jobs like the jobs of tomorrow. Let me share with you my favourite restaurant here. I live in Germany in the middle of Munich. It's an Italian restaurant. Every time I go, I'm greeted by the waiters. Maybe the pizza is done by a robot in the kitchen. But the Italian waiter makes me feel like I'm on holiday in Italy and that will not disappear. So again, they are like all this human interaction is not at risk to be automated because it's all about our human experience."

So trusting robots and algorithms to complete tasks that don’t require real people means human skills can be better used in other ways.