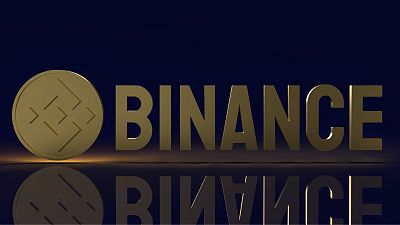 As crypto winter sends a chill down the markets, with the price of Bitcoin crashing below the key threshold of $20,000 (€19,000) and crypto exchanges laying off staff as fears of a recession bite, the world’s largest crypto exchange says it’s all déjà vu and is not concerned.

“It's an early industry and we’ve been through these cycles before. And I think it's sort of a natural part of this industry,” said Martin Bruncko, Binance’s Executive Vice President for Europe, in an interview with Euronews Next at this year’s VivaTech conference in Paris.

Bruncko admitted that while it was “very sad” to see companies go bankrupt and people lose money, such lower parts of the crypto price cycle can also spur innovation.

“Every time you have a crash, even in the normal tech industry, usually great things come out of it,” he said.

“And incidentally, some of the greatest companies like Facebook and LinkedIn, are companies that were all created in that first big Internet crash of 2001. So, I think it's a kind of a cathartic event also for the industry”.

It is a strikingly different picture painted in comparison to competitor Coinbase.

It was reported last week that it would be laying off a fifth of its workforce due to a possible recession, a need to manage costs and growing “too quickly” during a bull market, according to an email CEO Brian Armstrong sent to employees.

Binance takes to the City of Lights

Binance, on the other hand, is spending big, especially in Europe.

The company announced in April it would help build Web3 and blockchain projects at Station F - the Parisian start-up incubator - as part of a €100 million injection into France, an initiative it dubbed Objective Moon.

The start-ups that are selected will be hosted at Station F for free and could benefit from Binance subsidiaries.

Binance also picked Paris to be its Europe hub and is expanding its office in the French capital from 50 staff to 250.

We have a little bit of a magnet effect in the crypto industry. Usually when we go somewhere, we can bring a lot of that ecosystem with us and a lot of ecosystems follow that.

It comes as the company gained regulatory approval in May to provide digital asset services in France, the first European country where it has acquired such permission.

“[Regulation in France] allows us to be a fully regulated, overseen entity. So that's just a foundation,” said Bruncko.

“Now with its foundation, we can start building up a lot more, both for the customers, for France and the French economy in the French tech ecosystem.

“We're very, very fortunate that we have a little bit of a magnet effect in the crypto industry. So, usually when we go somewhere, we can bring a lot of that ecosystem with us and a lot of ecosystems follow that”.

However, some have criticised Binance and French regulators for granting Binance approval far too easily.

The French stock market watchdog the Autorité des marchés financiers (AMF), who granted the license does not - according to some experts - address elements such as business conduct regulation, market fairness issues, prudential requirements, consumer protection and transparency issue.

He said Binance has been engaged with AMF for two years and that “this is not something that we were just given”.

“The French government was very clear with us throughout this process that as excited as they might be about any interesting technology coming to France, the most important thing for France is the signature from the French state. They will only do it if they're 100 per cent sure that that entity actually fulfils all the criteria,” he said.

“There was absolutely no special treatment,” he added.

Binance flexes its muscle in Europe

Binance doesn’t plan to stop in France; it fully aims to become pan-European.

The company recently received approval for regulation in Italy and has plans to spread its wings in Spain, Portugal, Slovakia, Bulgaria, Romania and the Nordics.

“I'm super excited about that because I think there's so much potential for Web3 and generally for tech in Europe,” said Bruncko.

“As Europeans, we do super well in terms of keeping up with Americans and China in tech. And I think this is a really great opportunity for Europe to really actually lead for once,” he added.

European Union regulators may also finalise a crypto bill this month. The Markets in Crypto-Assets (MiCA) bill has been negotiated since 2020 and it aims to shape crypto development in the European common market.

“The ultimate goal of MiCA is to create a single market in crypto and blockchain,” he said.

“And we've seen it over and over and over again over the past 40 years that Europe can only compete if there is a single market, a proper single market. So we're very supportive of it. We're actually if anything, we're pushing for MiCA to come to force faster”.

Getting tough on Russia

One of the EU’s ambitions is to clamp down on cryptos being used for hacks and frauds, something which Binance has come under fire for since a Reuters investigation revealed Binance had in the past processed transactions totalling at least $2.35 billion (€2.22 billion) stemming from hacks, investment frauds and illegal drug sales.

“We've always put customer protection at the forefront, always. And we've always been making sure that we follow all the rules and regulations, including on money laundering. This has been actually massively strengthened harder since last year,” said Bruncko, adding that it has top staff working on this area, including some who used to work at Europol.

To be a Binance customer you have to go through several checks and you cannot be a Politically Exposed Person (PEP).

“We were actually ahead of the curve, even ahead of EU sometimes in terms of offboarding people who we thought were high risk from a perspective of either money laundering or corruption,” Bruncko said.

He said that when fresh sanctions were slapped on Russia for its invasion of Ukraine, Binance had banned accounts before people were even on the sanctions list, which included two daughters of high-profile people from the Russian government, who could not be named due to legal reasons.

Crypto regulation is also likely to increase since the so-called stablecoin TerraUSD and its sistertoken Luna crashed.

Binance though, says it has measures in place to stop its customers from losing everything.

One initiative is the responsible trading policy, which much like the responsible gamin policy, uses a system, particularly for new users to give them a cool-off period if they lose money very quickly.

“You could say it's going against your interests. You know, you could be making money,” said Bruncko.

“But if people lose money short term because they're not properly educated because they don't have the right skills, it not only creates actual real human tragedies, but it actually creates a bad impression and bad PR for the industry.

“I think in that sense, we really are in the long game,” he said.